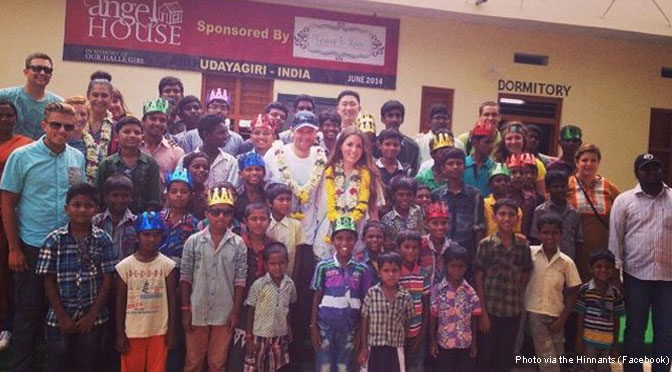 A Texas couple, made famous by their appearance on the television show The Shark Tank, created their successful business Grace & Lace shortly after the loss of their baby girl. Now, they are using their success and the love for their daughter to help orphans in India.

It all began in 2010 when, according to People, Melissa Hinnant and her husband Rick were happily awaiting the birth of their daughter. Hinnant was five months pregnant when she went into preterm labor. She had emergency surgery to attempt to stop the labor, and she was put on strict bed rest in the hospital. But two weeks later, doctors were unable to help her, and Hinnant delivered her baby girl who was still too young to survive as her lungs were not developed enough.

“We went through a very, very painful time,” Hinnant told People. “But I remember Rick looking at me, and he said we have a choice to make. He said we can either be mad at God and wonder why these things happen, or we can choose to believe there’s a bigger plan here. There’s some purpose, some reason – and something good is going to come out of this.”

Hinnant had begun to sew while she was in the hospital. She continued to do so to help get through the pain. By the fall of 2011, Hinnant was wearing her own creation – a pair of lace leg warmers.

“Everywhere I wore them, people would ask me where I got them,” she said. “So I put them up online, and within 48 hours we had over 400 requests for them.”

Grace and Lace was born. The business grew, moving from the garage to a warehouse and then to the TV screen.  That TV appearance changed everything. They went from up to 200 orders a day to up to 3,000. They knew that this was their chance to finally make a difference in the world, and make something good come out of their pain and from their daughter’s short life.

The couple teamed up with Angel House, which is an organization that builds orphanages in India. Hinnant had volunteered in India when she was 18 and she always knew she wanted to go back and do more.

“When I found out my friends were doing this, it just lined up and I said, ‘This is it, we’re supposed to link our business to this,'” she told People. “And right then and there we committed that a portion of our proceeds would go to Angel House, towards funding and building orphanages from the ground up.”

Today, the couple has helped to open seven orphanages, helping hundreds of children get off the streets and out of the slums of India. They provide them with shelter, a mattress, three meals a day, water, house parents, and a private school education. In addition, they have opened a freedom home in Nepal that works to save women from human trafficking.

Now with three children ages 5, 3, and 4 months,  the Hinnants are more committed than ever to helping children without parents or homes.

“We love our kids, they’re always in our arms, but the kids there, they’ve never really been hugged or shown love,” Rick Hinnant told People. “So we would teach them how to hug, and then they would latch onto you and they wouldn’t let go. That just rocked me.”

The Hinnants are an inspiring example of how we have power to turn our tragedies into ways to help other people who are suffering. We can help women and we can help children rather than decide anyone is better off not being born.