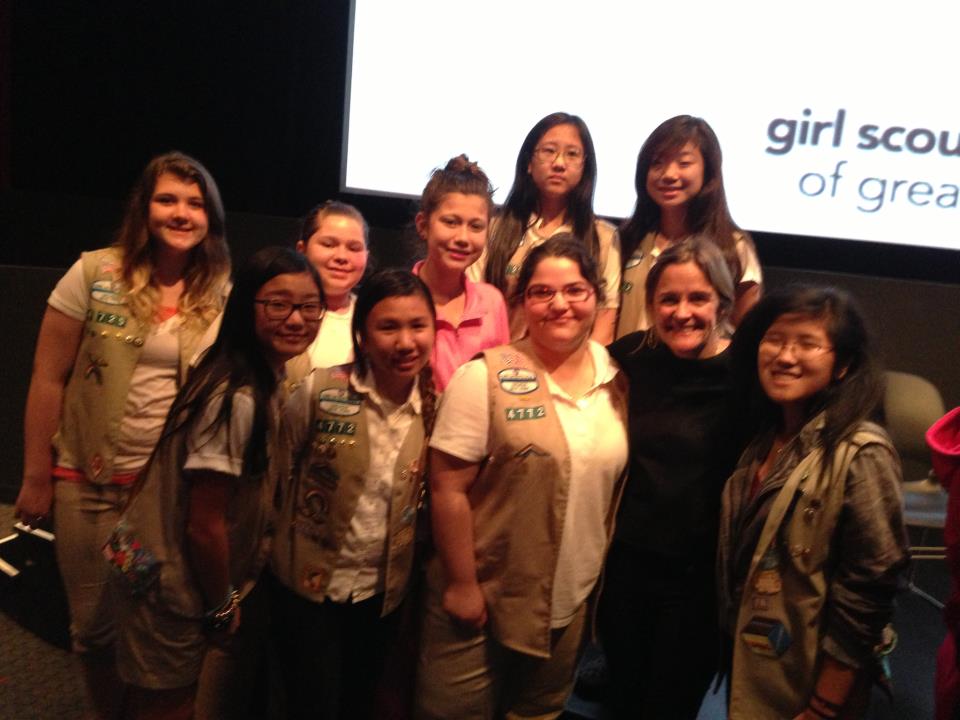 I have already written a couple of pieces on the connection between the Girl Scouts and pro-abortion organizations. Yet Girl Scouts of the USA still claims that it “does not take a position” when it comes to sex, birth control, or abortion.

Rochelle Focaracci is a former Girl Scout troop leader. She set up the website “Girl Scouts Why Not,” which documents the connections between the World Association of Girl Guides and Girl Scouts (WAGGGS) and Planned Parenthood.

While the Girl Scouts claims to not take a position on abortion, on May 9, 2013, MAKERS, a feminist, pro-abortion video of women whose “pioneering contributions” have apparently changed America, was screened as a Girl Scout-sponsored event.

Rochelle sent her thoughts on the MAKERS documentary and the involvement from the Girl Scouts to Mary Hasson, who wrote a rather informative and encompassing piece for LifeNews.com.

The Girl Scouts can no longer hide behind a neutrality stance when it actually sponsors such a screening and encourages participation. Hasson’s article sums up the connection very well in describing the event. In fact, the event and MAKERS were geared specifically to the Girl Scouts, from the Girl Scouts of Greater New York’s logo, a shout-out from the moderator to those Girl Scouts in the audience, and the college-aged panelist who was a former Girl Scout. Hasson mentions how the connection goes further, though:

In fact, the producer of the documentary explained during the panel discussion that they chose an online platform for MAKERS because “We knew we wanted to reach an audience like Girl Scouts” and girls are online more than anywhere else. Far from being a local event of one council, the MAKERS event garnered support from the Girl Scouts USA. The national group promoted the New York event on Twitter, inviting young Girl Scouts to “join” the live event or to watch it online later. And the MAKERS Facebook page included a photo after the event of the grinning producer surrounded by a group of Girl Scouts.

Also mentioned in the piece is that a panel discussion also featured pro-abortion feminists Marlo Thomas and Amy Richards. Thomas has been on MSNBC “to talk about the role of Roe v. Wade and reproductive rights in the greater feminist movement.” Richards is the co-founder of Third Wave Foundation, a pro-abortion group; an adviser to Planned Parenthood NYC; and a member of the MAKERS Board of Advisers.

For an organization that claims to take no stance on certain issues, the Girl Scouts seems to put an awful lot of support and promotion behind those who not only promote abortion, but criticize pro-lifers, including Phyllis Schlafly and Caroline Graglia. The Girl Scouts USA website links to the promoters of the video series and showcases it not only through the blog, but also through Twitter and Facebook.

The rest of Hasson’s article goes into a helpful description of those pro-abortion advocates involved in the MAKERS video series.

Rochelle also provided more information, however. Commonsense Media, though it gives the documentary a positive review, including a high review for “positive messages” and “positive role models,” does have a warning to parents:

Parents need to know that Makers: Women Who Make America discusses potentially sensitive issues like abortion, birth control pills, domestic violence, and rape as they relate to the women’s movement beginning in the 1950s through today. Most of these topics are talked about, not visualized, though there are a handful of blurred images – one of a women who died after an illegal abortion and another of an image of a naked woman. There is also some discussion of how the lesbian movement fit in (and diverged from) the mainstream feminist movement. Teens mature enough to handle these topics will find an inspirational story told by strong, smart, impressive women. Younger kids might be able to watch clips on key topics on the show’s website.

Also provided is a statement from Rochelle’s daughter, Madelyn, a former Girl Scout:

I’m very disturbed that Girl Scouts is promoting this pro-abortion project to girls – girls who are even younger than me! How can Girl Scouts continue to say they do not take a position on abortion and yet promote the MAKERS documentary, which clearly undermines the pro-life movement with an aggressive abortion-rights message? Girl Scouts continues to create controversy through pro-abortion events and relationships like MAKERS that contradict the pro-life position. And all along Girl Scouts are still being hosted and endorsed in our churches. It’s time to warn families – I hope our pastors will step up and protect girls.