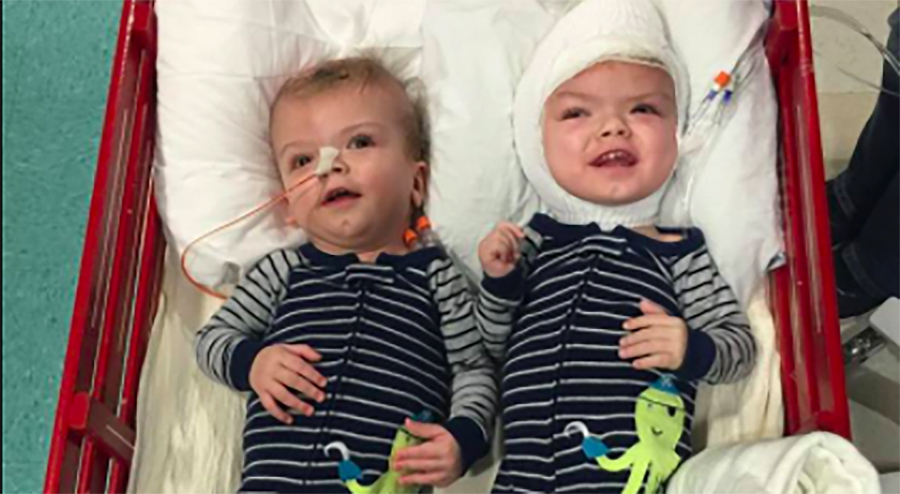 Though doctors feared they wouldn’t make it until Christmas, formerly conjoined New Zealand twins are thriving weeks after separation surgery. The twins were featured recently on the TODAY Show — just one outlet that is celebrating their amazing recovery along with much of the world.

Jadon and Anias McDonald were born conjoined at the head last September in a hospital in Illinois, but they were discharged from the hospital the week of Thanksgiving after recovering quickly from the surgery. Their mother recently posted a video of the twins cuddling and babbling. Baby Jadon even says “Dada” to his father, Christian, while Anias wraps his arms around his brother.

However, the joy is mixed with a tinge of pain, as Nicole McDonald describes the negative feedback she had received (referring to online abuse on a different CNN video featuring the twins). On Facebook she wrote:

… I mistakingly read through some comments on one of the CNN videos featured on a different news source. My insides turned as I read the cruel comments “why didn’t that mom just abort that creature” “that retard mom thinks her children are perfect” “that mom is in serious denial that monster looks like it came straight out of a nuclear area” “that woman should be sterilized” “this is why I believe in forced sterilization” and on and on and on. I mourn for those people and their hateful hearts. Obviously this “creature” should not have been “forced” to be born and live such an awful life…. #alllivesmatter #loveconquersall

According to the New Zealand Herald, “it was the fastest recovery for separation of craniopagus twins (conjoined at the head) in history, beating the previous record of eight weeks.”

The costly $2.5 million operation was performed at Montefiore Hospital in the Bronx, New York, by one of the world’s most esteemed surgeons, Dr. Philip Goodrich, who expressed his confidence that both boys would continue to rapidly develop and improve. A Go Fund Me page was made to help the family with the cost of the expensive surgery.

Jadon and Anias have miraculously thus far defied all statistics. According to Oxford Journals, “approximately 40% of conjoined [craniopagus] twins are stillborn and an additional one-third die within 24 h[ours], usually from congenital organ anomalies, leaving perhaps 25% to be considered for surgical separation.”