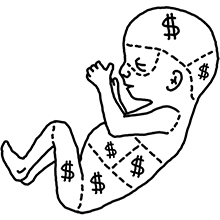 The issue of fetal tissue sale has been on the political forefront over the past year after an Irvine-based pro-life group known as the Center for Medical Progress released undercover videos showing Planned Parenthood trying to sell fetal tissue illegally. The videos have sparked congressional hearings and several state investigations.

In March of 2016, the Center for Medical Progress released a video highlighting how Planned Parenthood in Orange County, California, altered abortions in order to provide intact aborted babies to two local for-profit companies, Da Vinci Biosciences, and its sister company, DV Biologics. Now, California’s Orange County District Attorney’s Office is suing those two companies based out of Yorba-Linda, California. The suit claims the medical companies are illegally profiting off the sale of aborted baby parts obtained from abortion providers.

The Center for Medical Progress’s video features Dr. Jennefer Russo, the medical director of Planned Parenthood Orange and San Bernardino Counties, who performs abortions up to 24 weeks. In case there were any doubt as to whether this Planned Parenthood was involved with the procurement companies in question, Russo confirms it in this video. A press release from CMP at the time of the video’s release states the following:

In a press release discussing the lawsuit, the District Attorney’s office said that “From 2009 to 2015, the defendants obtained aborted fetus donations from Planned Parenthood and turned those donations into a profit-driven business. They did so by selling tissues and cells from the heart, lungs, kidneys, brain, intestines, skeletal muscle and bones of the aborted fetus donations. The companies advertised and sold these, what they called “prenatal products” from 2009-2015 to companies all around the world, earning hundreds of thousands of dollars in revenue.”

The lawsuit alleges that Da Vinci Biosciences and DV Biologics illegally profited from at least 500 sales to research facilities from 2012 through 2015, selling products for more than what it actually costs to process, handle and ship the tissue.

“This is not about politics,” D.A. Rackauckas stated, according to the Orange County Register. “This is about a clear violation of the law.”

In CMP’s video, Dr. Russo also explains that due to a nationwide shortage of the feticide digoxin, her Planned Parenthood facility isn’t using it to ensure fetal demise prior to their late-term abortions. CMP’s press release notes, “Without a feticidal procedure like digoxin, it is possible for a fetus extracted intact during an abortion to be born alive.” One fetal tissue procurement worker experienced exactly that, as recorded in this CMP video.

Research has shown that by 20 weeks, the age at which these late-term abortions are taking place, preborn children likely feel pain.

Some products were allegedly sold to different customers at different prices.

The district attorney’s lawsuit alleges unfair and illegal business practices under California penal code. The suit is seeking a $1.6 million fine and an injunction preventing the future sale of fetal tissue at a profit.