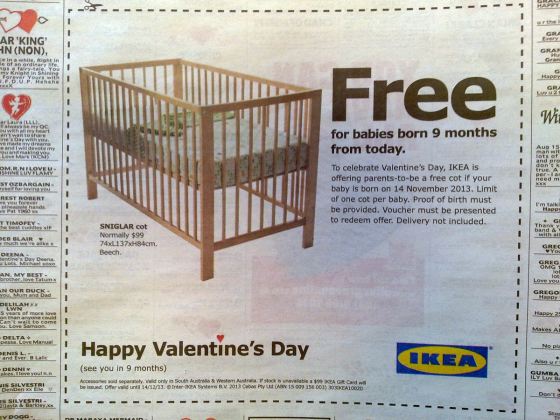 Did you catch that?

Sometimes the truth about when life begins shows up in the most unlikely places, such as an ad for IKEA, the trendy furniture store. Posted on Reddit, this ad for Australian IKEAs said:

“To celebrate Valentines Day, IKEA is offering parents-to-be a free cot if your baby is born on 14 November 2013. Limit of one cot per baby. Proof of birth must be provided. Voucher must be presented to redeem offer. Delivery not included.”

It’s an idea that made customers smile, and it may even make some beg their doctors to induce their babies that day. But the truths in this lighthearted ad ring home.

The truth behind it says, without blunt language, that if you have sex and an egg is fertilized, in about 9 months, your baby will emerge from the womb, so here’s a bed for Junior. Unless you purposely stop Junior from coming forth, Junior will be born, because when an egg is fertilized, life begins.

Even IKEA knows this. And so does the American publication The Consumerist, who reports on it and notes:

Of course, delivery is not always nine months from the day of conception, so the kids who will score the free furniture could have been conceived within a few weeks of Valentine’s, which some may say is not really fair to the parents-to-be who are spending tonight together in the hopes of earning a free crib in the fall.

Did you catch that? After conception, a baby comes.

While nothing overly serious is implied by the ad, it’s a good reminder to us that everyone really does know when life begins. That’s why this ad works. You don’t see Planned Parenthood protesting IKEA, or people making a big stink about the ad. Why? Because the reality of the abortion mentality is that it’s a baby only if you want it to be. Since people clipping this coupon want the baby, it’s a baby.

The reasoning behind the abortion industry’s mentality is truly mind-boggling. It has to be, because it doesn’t involve the full use of one’s mind. An industry that values life by desire for it is already so mixed up that it would be hard to explain to anyone who wasn’t acculturated to death.

IKEA wasn’t intending anything but a fun Valentine’s Day gimmick, and it did make a lot of us smile, but at the end of the day, it reminds us of truth. After conception, a baby comes – unless you kill the baby first.