Don’t tear your hair out on hearing this argument. Read on, and learn how to combat it.

I had a conversation with a pro-choice person this year that was unique enough that it bears repeating, in case you ever hear a similar argument.

We set up some poll tables and Justice For All‘s new “Where Do You Draw the Line” exhibit at Fresno City College. A student walked up, and I engaged him, asking him what he thought about abortion. “Mark” responded by saying something I almost never hear on college campuses: “I don’t agree that the unborn is alive.”

I responded the way JFA’s Steve Wagner trains people to respond when someone says something like “no one knows when life begins!” I asked a clarification question: “Do you mean biological life, or something more philosophical, like when a valuable person begins?”

Mark responded that he meant biological life and that his view was that a baby isn’t alive until birth. I asked Mark, “If I was able to offer you some scientific evidence that the unborn is alive, would that be helpful to you?” He said, “Sure, go ahead.”

I briefly explained that biologists generally agree that when an organism grows through cellular reproduction, metabolizes food into energy, and reacts to stimuli, it’s biologically alive. (There’s still debate about a few things like crystals and viruses, but not human embryos.)

A quick aside: I had not actually given Mark a “definition of life.” I gave him something much less controversial. I described the things biologists look for when they observe an entity to determine whether or not it’s biologically alive.

I was a little concerned now because I was in new territory. I had never heard of a competing theory of biological life, much less a definition from a respected institute like NASA. So I did what Greg Koukl from Stand to Reason recommends when you’re talking to someone who may know more than you do: I went into fact-finding mode. I said to Mark, “I’ve never heard of NASA’s definition of life. Could you tell me about it?”

Mark smiled and responded that NASA wanted a definition of life that they could use to determine whether an alien life form they may meet up with in the future is or isn’t alive. And here’s their definition, suggested by Carl Sagan: “a self-sustaining chemical system capable of Darwinian evolution.”

Another aside: there is scientific debate about this definition. I later read one scientist comment on this definition, explaining her view that while a species as a whole may be capable of Darwinian evolution, a single member of a species is not. (Unless you live in the X-Men universe, I suppose.)

Either way, Mark and I focused on the part of the definition that seemed to show that the unborn are not alive by that standard: “a self-sustained chemical system.” Mark commented that since the fetal human is connected to his or her mom via the umbilical cord, it is not a self-sustained system, thus it’s not alive.

I responded, “But what about babies right after they’re born? Some parents don’t cut the umbilical cord until an hour after birth to be sure that all the nutrients get to the baby. Is that baby alive?”

I responded with a slightly incredulous tone, “But he’s crying and peeing! It seems weird to say that a crying, peeing baby is not alive.”

Mark responded, without missing a beat, “I know, it’s weird, right? But that’s my view.”

I hesitated. I thought my argument would be a brilliant way to get Mark to concede his case, but instead, he bit the bullet. So I extended my argument. I pulled out my JFA exhibit brochure that has more information and opened to my favorite page, the fetal development chart.

Specifically, I pointed to this picture of a two-cell zygote in the Fallopian tube:

I said, “that human is not attached to anything, but she is growing, reacting to stimuli, and metabolizing food into energy. Is she alive?

Then I pointed to the next picture:

I said, “Then, around six days after fertilization, the embryo implants in the uterine wall, or endometrium. Is she alive?”

Then I pointed to the picture of a newborn:

Me: “This guy’s umbilical cord is still attached. Is he alive?”

Me: “But after they cut the umbilical cord, he becomes alive?”

Me: “So we have a single entity, who is alive after fertilization while traveling down the Fallopian tube, ceases to be alive at implantation, is still not living at birth, but, after the umbilical cord is cut, becomes alive again.”

I paused, hoping he would see how bad this argument was.

So I tried one last thing. I said, “Mark, it’s odd to me that the organization that chose this definition of life is NASA.” 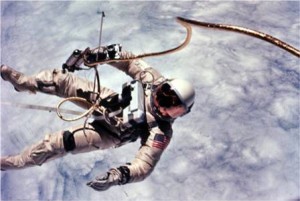 Me: “Well, does NASA provide life support to its astronauts during space walks?”

Me: “Why would they do that? The astronauts are dead, aren’t they? They’re connected to the Space Shuttle. They’re no longer self-sustained chemical systems.”

Mark hesitated. I let the silence hang there for ten or fifteen seconds.

Then I said, “Mark, you’ve consistently stuck to your definition during this entire conversation, but to do so, you’ve had to state that a living organism ceases to be alive and then becomes alive again later, sometimes an hour after birth, after breathing, crying, and peeing. It seems like your definition of life may also exclude astronauts. You should abandon your view. It seems very clear to me that your definition has much greater problems than my description of what biologists look for when they determine whether something is alive or not. Frankly, if I want to know how to get to the moon and back, I’ll ask NASA. If I want to know whether or not a human embryo is biologically alive, I’m going to ask an embryologist.”

Mark smiled and nodded, promising to consider that. We chatted for a little while longer, and then I graciously ended the conversation.

So what’s the takeaway? The most important concept is that when somebody starts talking about “life” in the abortion debate, don’t make another step before clarifying whether they’re talking about biological life or something more philosophical. Then you can respond to their argument without accidentally committing a straw man fallacy.

And if you ever hear someone bring up NASA’s definition of life, you now have a few tools in your toolbox to turn that into a more productive dialogue.