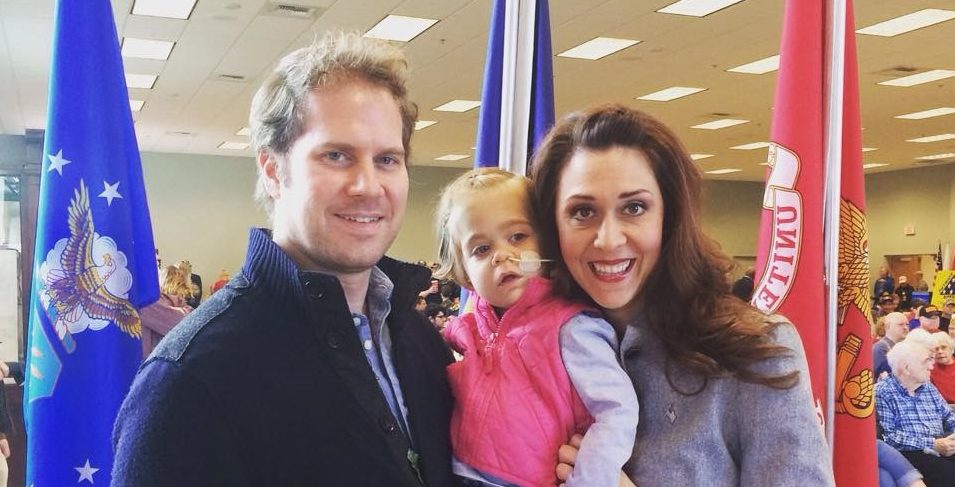 In 2013, pro-life Republican Congresswoman Jaime Herrera Beutler announced that the baby girl she and her husband Daniel were expecting had been diagnosed with Potter’s Syndrome. The condition is caused by impaired kidney function. Low amniotic fluid means the lungs don’t develop properly, so the condition has been considered fatal. The couple was advised to abort their daughter, but they refused.

Today, that baby girl is a happy three-year-old.

After learning of the diagnosis, Herrera Beutler asked for prayers, which the family received from across the country. However, that prayer request also brought out the darker side of abortion backers who expected her to ditch her pro-life views in favor of aborting her child. They expected the Congresswoman to spare herself the pain of giving birth to a child who would likely die, and didn’t hold back in their heartless comments:

– Abort the baby. Wait a few months. Get pregnant again. This is not a big deal.

– I laugh at her in that her political ideology has her in a corner I would wish nobody in.

Rather than give up on their daughter, the couple became her biggest advocates. A parent who had faced a similar situation connected them with doctors at Johns Hopkins who were willing to try an unproven treatment called amnioinfusion. On a weekly basis, infusions would be given to Herrera Beutler to increase the amniotic fluid and give Abigail’s lungs a chance to develop.

“As soon as fluid was introduced to her face you could watch her chest fluctuate in and out. She was practice breathing,” Dan Beutler told KOIN local news.

After five weeks of infusions, Herrera Beutler went into preterm labor — a risk with amnioinfusion — at just 28 weeks in July 2013. Doctors weren’t hopeful that the baby would survive.

“Someone said ‘Look down at your baby,'” Herrera Beutler said. “We looked. She looked up at us, tiny, 2 pounds, 12 ounces. She looked up at us and she opened [her] mouth drew a breath, then cried. And that doesn’t happen if your lungs can’t breathe.”

The little girl received surgery and dialysis and was stable within days after birth. At the time, she was the only known survivor of Potter’s Syndrome.

Her father put law school on hold to take care of her while her mother returned to work as a congresswoman. Then, in February 2016, Dan Beutler gave his daughter the ultimate gift — a kidney. The surgery was a success, and Abigail is now a thriving little girl.

The couple wants other parents to know that they should never stop advocating for their children and never give up. Innovative medical treatments continue to be discovered, and new research is constantly finding ways to save children with previously fatal diagnoses. (See Baby Jude’s story for another example.)

“Trust your gut and don’t be afraid to raise those questions and advocate and find the doctor who will partner with you,” said Dan Beutler.

The family is not only celebrating the successful kidney transplant between father and daughter. In May of 2016, they welcomed their second child, a baby boy named Ethan. And in November, Herrera Beutler was reelected to a fourth term in Congress and therefore could have a hand in defunding Planned Parenthood.