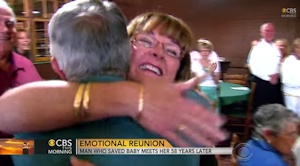 It was a normal Thursday afternoon when Dave Hickman went hunting on September 22, 1955. The then 14-year-old boy was hunting in the Indiana woods with his grandfather when he heard a “soft cooing” sound. Curiously investigating the sound, the boy found what turned out to be a baby girl. “She was soaking wet. Her lips were blue. She was just wrapped in a towel.”

Dave and his grandfather called the sheriff and took the baby to a nearby hospital, where she received the name Roseann Wayne. Dave said goodbye to Roseann when what he describes as “two angels” (from the hospital) brought her to his school before her new adoptive family took her home. Tearfully, he said goodbye.

Dave never saw her again for fifty-eight years, although he spent all that time looking for Roseann. Dave eventually contacted John Catey, a former Wayne County sheriff who had also been a commissioner and councilman. Catey helped Dave with his search for Roseann by looking up local records and researching on the internet. It was John who ultimately located Roseann, now known as Mary Ellen Suey. Mary Ellen had always wanted to find Dave as well, but had no idea how to make that dream a reality.

Dave and Ellen finally reunited last week in Tennessee, where dozens of loved ones gathered to witness the long-separated duo. It was an emotional event for both Dave and Ellen, who held back tears as they met each other once again. Ellen acknowledged that, if it were not for Dave, she wouldn’t be here. Dave says, “She will always be my little girl.” Although authorities never discovered who dumped the baby all those years ago, Mary Ellen harbors no resentment; she is just grateful that Dave found her. Dave says that Mary Ellen was “saved by the hand of God.”