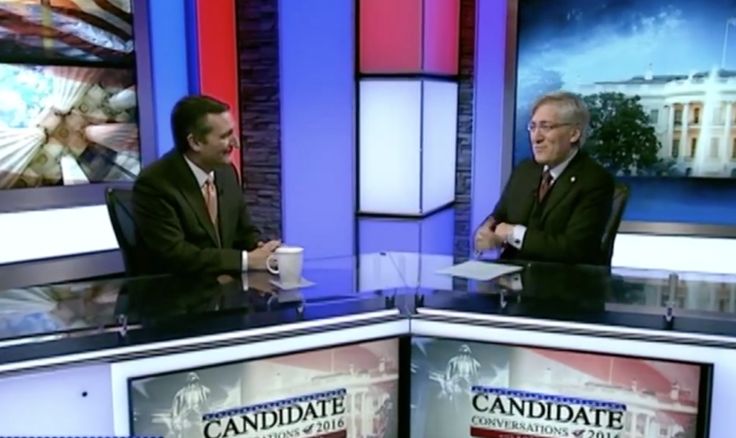 Pro-life Professor Robert George of the American Principles Project has been conducting extensive interviews with the Republican presidential candidates, and in his talk with Ted Cruz, the Texas Senator made his boldest pro-life promise yet.

GEORGE: Ted, the Fourteenth Amendment says that no state shall deprive any person of life, liberty, or property without due process of law, nor deny to any person within its jurisdiction the equal protection of the laws. Now, the amendment in its fifth section includes a provision that delegates to the Congress the power, and I quote, to enforce by appropriate legislation the provisions of this article.

GEORGE: Now, do you believe that unborn babies are persons within the meaning of the Equal Protection Clause of the Fourteenth Amendment, and if so will you call on Congress to use its authority under the Fourteenth Amendment, pursuant to Section 5, to protect the unborn? Or do you take the view, as some do, that we can’t do that until Roe v. Wade is overturned, either by the court itself or by constitutional amendment? Where do you stand on that?

CRUZ: Listen, absolutely yes. I think the first obligation of everyone in public office is to protect life. Life is foundational. In fact, as you look at the Declaration, that ordering of unalienable rights, life, liberty, and the pursuit of happiness, I think it’s a very deliberate ordering. Without life there is no liberty, and without liberty there is no pursuit of happiness. That each builds upon the other, and I very much agree with the Pope’s longstanding, and prior popes before him, longstanding call to protect every human life from the moment of conception to the moment of natural death.

GEORGE: And we can do that by congressional action—

GEORGE: —without waiting for the Supreme Court to overturn Roe v. Wade?

Cruz isn’t the only candidate to specifically affirm that Congress can end abortion without overturning Roe or amending the Constitution—Mike Huckabee has passionately made it a recurring theme and Rand Paul sponsored the Life at Conception Act in past sessions of Congress—but he is the only one among the top tier of likely nominees. Cruz has not yet specifically supported the LCA, but this is an encouraging sign he’ll get there, too. *

This is exactly where the focus of the national pro-life conversation needs to be. For years we’ve been settling for little more from ostensible pro-life standard bearers than platitudes about changing hearts and minds, overturning Roe at some undetermined time in the future by appointing good judges, and generally failing to give the issue the emphasis it deserves… and little changes nationally (there is more progress at the state level, but they can only do so much within the federal shackles around abortion law). Add in the GOP’s recent failures on defunding Planned Parenthood and caving in to pressure on the 20-week abortion ban, and it’s clear the party needs to do something dramatic to regain pro-lifers’ confidence.

Going on offense against the narrative that pro-lifers are helpless is the answer. As we’ve discussed before, putting all our hopes in the judiciary simply leaves too many variables to chance, and amending the Constitution is too long-term a project to help the preborn that are dying today. But Roe v. Wade itself admits that the Fourteenth Amendment may theoretically protect the preborn from abortion, giving Congress all the opening it needs to connect the theory with the incontrovertible facts of what the preborn are.

So go on offense. Directly engage what Roe says. Educate the public that its results are more radical than they assume. Have a real debate about the specifics of embryology and personhood and humanity. Drag pro-aborts out of the realm of platitudes by forcing them to really discuss abortion in concrete terms for once in their lives. Show America that the issue isn’t a question of women’s health versus abstract, vaguely-religious-sounding notions of “sanctity of life,” but about literal violence against children.

This is also why pro-lifers themselves need to be the ones interviewing pro-life candidates and moderating debates. We already know most of these folks are promising to be pro-life presidents and are good at denouncing Planned Parenthood. We don’t need another dozen evenings of them getting on stage and reciting their stump speeches. Instead, we need them to be put through substantive gauntlets like this one where we can get specifics on the record to compare and contrast, to have truly useful comparisons of how they would put their principles into practice:

Robert George is doing yeoman’s work by getting the candidates to discuss issues in real depth, and it’s exciting to hear Ted Cruz take the opportunity to give the right answer. But we need more: more of these questions in more high-visibility venues, more of the candidates volunteering and reiterating these stances, and more clarity that there’s a real plan in place for ending abortion, and that the next potential Presidents will fight for it.