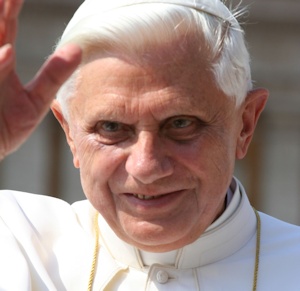 Would to God that our politicians were the same. As I received word of the Pope’s announced resignation, I was reminded of the vice presidential debate last year. Vice President Biden was asked about the role that religion had played in forming his personal views about abortion. He responded:

My religion defines who I am. And I’ve been a practicing Catholic my whole life. And it has particularly informed my social doctrine. Catholic social doctrine talks about taking care of those who can’t take care of themselves, people who need help. With regard to abortion, I accept my church’s position that life begins at conception. That’s the church’s judgment. I accept it in my personal life. But I refuse to impose it on equally devout Christians and Muslims and Jews and–I just refuse to impose that on others, unlike my friend here, the congressman. I do not believe that we have a right to tell other people that women can’t control their body. It’s a decision between them and their doctor, in my view. And the Supreme Court–I’m not going to interfere with that.

Certainly, Vice President Biden is correct that his Church’s “social doctrine talks about taking care of those who can’t take care of themselves.” There can be no question that, ever since Roe v. Wade, the Roman Catholic Church has been one of the leading forces in the fight for life in the U.S. (and ultimately around the world). According to the Catholic Church:

The human being is to be respected and treated as a person from the moment of conception; and therefore from that same moment his rights as a person must be recognized, among which in the first place is the inviolable right of every innocent human being to life….Since the embryo must be treated as a person, it must also be defended in its integrity, tended and cared for, to the extent possible, in the same way as any other human being as far as medical assistance is concerned.

During Benedict XVI’s relatively short tenure in the papacy, he has consistently upheld his Church’s longstanding commitment to the rights of the unborn. In his message on the World Day of Peace, he declared that those who support “liberalization of abortion” are “proposing the pursuit of a false peace.” He argued:

Indeed, how could one claim to bring about peace, the integral development of peoples or even the protection of the environment without defending the life of those who are weakest, beginning with the unborn….Neither is it just to introduce surreptitiously into legislation false rights or freedoms which, on the basis of a reductive and relativistic view of human beings and the clever use of ambiguous expressions aimed at promoting a supposed right to abortion and euthanasia, pose a threat to the fundamental right to life.

Pope Benedict has personally conversed with President Obama and former Speaker Nancy Pelosi on the issue of abortion. He has publicly supported pro-life activism, even as he recently offered a tweet in support of the March for Life in Washington.

Vice President Biden says that he agrees with Church teaching that life begins at conception. However, simply believing that truth doesn’t actually save any lives.

We all know that talk is cheap. Regardless of the statements that Vice President Biden has made, the policies that he and the president have put forth have advanced a radical pro-abortion agenda. At present, we have an administration mandating that Christian business owners violate the tenets of their faith by providing health insurance to their employees to cover the cost of abortion-inducing drugs.

Vice President Biden is worried about “imposing” his beliefs on “devout Christians and Muslims and Jews” who may disagree with him. But I have yet to hear anyone complain when we impose our beliefs about the sanctity of life on killers of the born like Adam Lanza and James Holmes, who shamelessly fire bullets into crowds of innocent people. Why should we worry about imposing our beliefs on killers of the unborn, even when those killers claim to be religious people?

If I had an audience with the vice president, I would urge him to follow the leadership of Pope Benedict XVI. The pontiff does not merely believe in the sanctity of life; he actually defends and protects it. Would to God that our politicians would do the same.