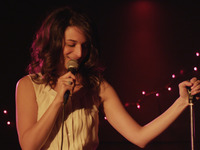 The Sundance Film Festival might very well have a new darling for Hollywood’s crowd of pro-aborts to crow about. Obvious Child is a romantic comedy coming soon to a theater near you. What’s it about?

OBVIOUS CHILD is an honest comedy about what happens when Brooklyn comedian Donna Stern (Jenny Slate) gets dumped, fired and pregnant just in time for the worst/best Valentine’s Day of her life. Forever nudged by her parents to make better choices, Donna’s forced to do just that when a one-night stand leads to a difficult decision that does and does not define the rest of her life. Though confident in her choice, Donna must gain the confidence to believe in her talent, herself, and the best in those around her, especially one surprisingly decent guy (Jake Lacy) who just might make this the worst/best Valentine’s Day ever.

So a girl gets dumped, has a one-night stand, and then has an abortion. Sounds super romantic. It’s exactly the stuff girls dream of. Maya Dusenbery at Feministing is thrilled about it, Jezebel gushed over it, and the original short film got rave reviews from Bitch Magazine. And they’re just so, so sad that more movies don’t lovingly feature abortion. Because, you know, that’s just what romantic comedies need to up the love factor: some baby-killing. Nothing says love and intimacy like ripping a baby apart limb from limb!

The odd thing about this is that it isn’t the first time pro-aborts have felt the need to cram abortion into romantic situations. They’ve bemoaned the lack of abortions in romance novels, celebrated a wedding announcement that gushed over the couple’s abortion, and tried to make abortion romantic in the creepiest abortion ad of all time. Abortion advocates have been clamoring to link abortion and romance, and are just dumbfounded that it — shockingly isn’t catching on.

But why would it? There is no one out there who dreams of the day that they can have their very own abortion. Even pro-aborts will say that women don’t make the decision to have an abortion lightly, and pay all kinds of lip service to how difficult and emotional it can be. People read romance novels, or watch romantic comedies, for escapism, to enter a fantasy world for a while, where obstacles can be overcome and love wins in the end. Abortion doesn’t fit into that world.

There’s a decided lack of love in the decision to kill your own child, after all, so why would a story about love feature that decision? It says a lot about the twisted mindset of abortion advocates, that they feel the one thing romance is missing is more stories about abortion. Abortion can’t just be legal. It has to be glorified, celebrated… romanticized. It’s disturbing, to say the absolute least.

Interestingly, over at the very much pro-abortion Slate, the film is being panned. Why? Because the heroine is unlovable, and she’s basically an irresponsible girl who is avoiding consequences.

But as far as message goes, I felt like this short film fell flat. Its explicit purpose is to preach the pro-choice counterpoint to the anti-abortion undercurrent so winningly portrayed in films like Juno and Knocked Up . I was unswayed. I can’t help wanting a little hope and redemption in my entertainment (not to mention real life). That’s why the plots of all of the recent pregnant-mama films resonate: Selfish, naive young people get pregnant and decide to stop living entirely for themselves and take responsibility for their actions. And we cheer for them, because we want their fictional careless escapades to be redeemed by some warm-hearted selflessness.

I can hear the criticism piling up already. “But it’s not responsible to get pregnant! Abortion is the responsible thing to do, unless you’re the privileged daughter of a well-known politician!” That’s certainly an argument that has a lot of traction in our society today. But for me the most poignant line of Obvious Child was when leading-lady Donna, who fits the classic selfish and naive stereotype to a tee, tells her mom over the phone, “I’m going to have an abortion today.” Her mother’s calm, scripted voice doesn’t waver with the slightest bit of emotion, and soothingly assures her, “Well, you know, that’s probably the best thing to do. You’re so young. You have your whole life ahead of you.” Except, from what I can tell, Donna is a self-absorbed partier in her late 20s or early 30s, prone to one-night stands and brainless conversations with her best gal pal. If I had to flash-forward to a Donna in 20 years, I feel like I’d imagine her living the same old self-absorbed way, only with more wrinkles. All of which is to say, a little dose of reality might do her some serious good.

Does anyone else feel like they just entered The Twilight Zone? This is just one of the points that many pro-lifers have tried to make plenty of times. Abortion is inherently a selfish choice that robs women of hope and love. It takes an innocent life. And yet here is a pro-abortion writer, flummoxed because they can’t empathize with a short film featuring a woman who cavalierly decides to have an abortion.

Still, considering that After Tiller was the darling of the Sundance Film Festival when it debuted, there’s a very good chance that Obvious Child will likely get the same treatment. Also like After Tiller, though, it will probably be ignored by most of America, who doesn’t feel the need to sanctify late-term abortionists, or romanticize killing unborn children.