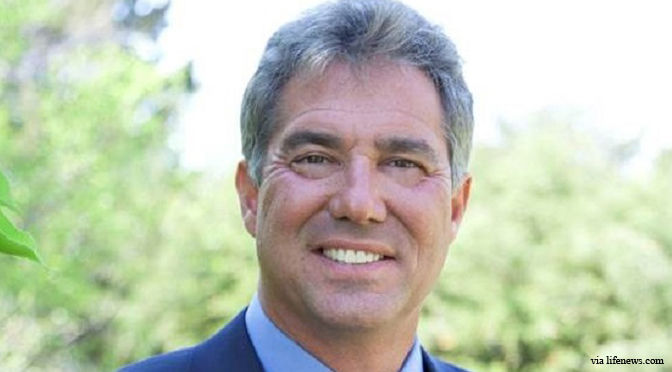 On Tuesday, Operation Rescue president and Center for Medical Progress board member Troy Newman was en route to speak at a convention for Right to Life Australia in Melbourne when he was ordered off his airplane in Denver, Colorado. Newman soon discovered that the Australian government had suddenly revoked his visa because they believe he promotes violence against abortion providers.

RED ALERT!!! The Australian government has revoked my visa in midflight. I was pulled off a plane in Denver and told I…

Yesterday, Newman reported on his Facebook page that he was able to get a flight to Australia. However, today, the New York Times reports that Newman has been detained in Australia and may be deported within the next few days:

The group’s president, Troy Newman, was scheduled to give a series of talks sponsored by an Australian anti-abortion group. But some politicians in the country had criticized his impending visit, saying he could instigate harassment or even violence against women and medical professionals. Mr. Newman’s visa was canceled this week by Australia’s Immigration Ministry, the Australian Broadcasting Corporation reported.

A Labor member of the Australian Parliament, Terri Butler, wrote this week to Peter Dutton, the minister for Immigration and Border Protection, saying she was concerned that Mr. Newman could inspire “the harassment and intimidation of women accessing reproductive services and professionals offering those services at medical clinics” or even “threats or the commission of acts of violence.”

She cited passages from “Their Blood Cries Out,” a 2000 book Mr. Newman helped write, which says medical professionals who provide abortions should be executed for murder.

Operation Rescue released a statement, responding that “Newman has never advocated violence against abortion providers or facilities and has instead adamantly encouraged pro-life activists to work through the legal, legislative, and justice systems to bring abortionists who are breaking the law and harming women to justice”:

“The pro-abortion bullies in Australia who have been slandering Troy Newman to the government have had to stoop to the lowest of lows to silence his message about Planned Parenthood’s criminality and his use of peaceful, law-abiding activism to expose abortion abuses,” said [Cheryl] Sullenger. “Now that they have told so may lies about him, they must make sure he is deported lest their shame be exposed to the people of Australia.”

Newman was not notified that his visa had been cancelled until he was already enroute to Melbourne. Along the way, he was banned from boarding a United Airlines flight from Denver to Los Angeles and was told he was banned from flying on order of the Australian government. Newman continued on to Los Angeles on another airline then on to Melbourne thinking this misunderstanding would soon be corrected.

“Troy has been treated like a criminal even though he has never been convicted of a crime and is being detained and deported based solely on his religious and pro-life beliefs that are opposed by certain abortion lackeys in the Australian government,” said Sullenger. “This is unjust and as a representative of Operation Rescue, I demand his immediate release and an apology from Minister Dutton for the trouble he has caused by acquiescing to false accusations of those who oppose Newman’s pro-life stance.”

According to the Inquisitr, Newman’s attorneys have stated that “their client’s visa was revoked simply because the Australian government disagrees with his stance, not because he poses a threat to security in the nation. The activist and his lawyers have now been given 24-hours to try to come to some kind of agreement in a move that delays his immediate deportation back to the U.S.”

Newman had planned to “share news concerning the shock videos [from the Center for Medical Progress] and their impact in American politics as well as his message of peaceful activism in order to save innocent lives from abortion,” according to Operation Rescue’s press release.