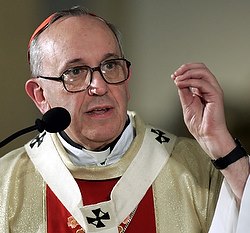 Now, Francis had a lot to say, including on hot-button issues such as homosexuality and abortion. As has happened in the past, his statements were not only heard by the mainstream media and those with beliefs counter to the pro-life Catholic Church, but were also somehow misinterpreted and prematurely celebrated.

You may have already read Lauren Enriquez’s piece  as to how the pro-abortion group NARAL actually thanked the Pope. They posted this meme of thanks across their Facebook. The meme also links to this article from The New York Times, which claims the Pope says the Church is “obsessed” with gays, abortion, and birth control. Another piece claims to be surprised by Francis.

It is truly a wonder that pro-abortion sources like The New York Times and organizations like NARAL are shocked and surprised into thinking that the Pope is suddenly calling for change on Church issues, issues which those who know the Catholic Church should know are non-negotiable. Thus it is not the case that Francis is so different he is going to radically change Church teaching. When Francis speaks in the manner in this interview and others, he is providing the opportunity for clarification. Any confusion is the fault of the mainstream media and others who misinterpret his statements.

What the Pope said should not be so surprising. It may be a welcome relief, but it is not surprising. As already mentioned, Francis is opening the door to providing clarification on important Church teachings. He is doing so in a way that is more inviting to others though, through tone and context, so that it may reach larger audiences. The Holy Father may want to reach as many people as possible, but that doesn’t mean he’s going to suddenly act necessarily according to popular opinion.

Bearing this in mind, let’s see what Francis actually said that has stirred up such controversy:

“The dogmatic and moral teachings of the church are not all equivalent. The church’s pastoral ministry cannot be obsessed with the transmission of a disjointed multitude of doctrines to be imposed insistently. Proclamation in a missionary style focuses on the essentials, on the necessary things: this is also what fascinates and attracts more, what makes the heart burn, as it did for the disciples at Emmaus. We have to find a new balance; otherwise even the moral edifice of the church is likely to fall like a house of cards, losing the freshness and fragrance of the Gospel. The proposal of the Gospel must be more simple, profound, radiant. It is from this proposition that the moral consequences then flow.

Now, nowhere in this excerpt is there a call for the Church to loosen its stance on abortion. Also, note how Francis also did not actually say that the Church was obsessed, but rather that it cannot be obsessed. What I do see is a reminder for the Church to speak on these issues in a loving manner, and within context. As the Holy Father, Francis leads and guides the Church. If we speak on abortion, on birth control, on gay marriage in a way in which people do not feel condemned, then they will be more willing to listen. We will have a greater chance of reaching more people, especially those who are hurting and looking for healing, rather than condemnation, from the Church.

Let us also examine what Francis said just before his remark about abortion, gay marriage and birth control:

“This is also the great benefit of confession as a sacrament: evaluating case by case and discerning what is the best thing to do for a person who seeks God and grace. The confessional is not a torture chamber, but the place in which the Lord’s mercy motivates us to do better. I also consider the situation of a woman with a failed marriage in her past and who also had an abortion. Then this woman remarries, and she is now happy and has five children. That abortion in her past weighs heavily on her conscience and she sincerely regrets it. She would like to move forward in her Christian life. What is the confessor to do?

Dare I say that that perhaps NARAL and  Francis can find some sort of common ground in that the Church need not focus on condemning hurting, post-abortive women, but rather helping them find healing and forgiveness? Surely the pro-abortion group did not think that Francis was suddenly becoming anything but pro-life?  For despite the approach of love and forgiveness towards post-abortive men and women, we can be sure that the Church, under Francis, or under any Pope, will not cease to condemn the actual practice of abortion.

And the Holy Father is not saying that we should not speak on abortion, nor is he downplaying the right to life. As a Catholic, I will proclaim this truth. I do so from a secular viewpoint as well. But as a Catholic, I do find guidance and comfort in the words of Francis, who speaks words that Catholics and non-Catholics alike can follow when telling others the pro-life message.

Consider, as well, that Francis is saying that the matter does not need to be discussed so much, not because he is afraid of turning people away from the Church, but because the Church is already clear on such controversial subjects. Any true Catholic should know and follow the Church’s teachings on these three matters to be in good standing with the Church. I have said before that one for one to be truly Christian, they must be pro-life. I still keep to that statement. This is especially true for the Catholic Church. The Church is abundantly clear on its pro-life stance, without exception, a position it is known for, and even stands out among other Christian denominations.  Catholics who call themselves pro-choice cannot truly be Catholic then. They know that their view is counter to that of their Church, yet for whatever the reason, be it personal, political, or some other, they think that they know better than the Church, that they can pick and choose.

As if the timing could not be more providential, the day after the interview was released, it was also reported that Francis had spoken to a group of Catholic gynecologists. NARAL’s meme of thanks is certainly looking premature now, isn’t it? The American Life League, a Catholic pro-life group, certainly seems to thinks so with their own meme, which is a continuation of NARAL’s. 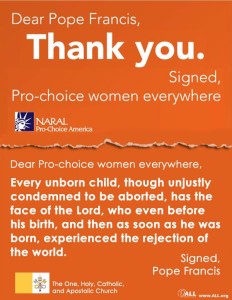 Francis knows that his Church is pro-life, and he knows that God is  pro-life. The Holy Father is also aware of the fallen, hurting world in which we live in though, and how we must perhaps turn to creative means in reaching these hurting people whom God still cares for, so that they may hear the love and truth that is the pro-life message.