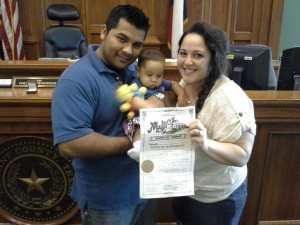 Today we have a tragic pregnancy situation out of Fort Worth, Texas. At LifeNews, Rachel Cox summarizes:

In November, Erick Munoz’s wife Marlise, who was 14 weeks pregnant, suffered a blood clot and is still in the hospital hooked up to machines. Doctors say she is brain dead and will never recover. Erick Munoz believes the baby will have defects and the baby’s life won’t be worth living. Her husband says his wife clearly stated she never wanted to be on life support. Erick Munoz wants to “honor his wife’s wishes” and remove her from life support which would kill her and their unborn baby. However, Texas law prevents the removal of a pregnant woman from life support and Erick Munoz is publicly voicing his opposition.

Doctors plan to assess the baby’s viability and decide whether to attempt a Cesarean section at 24 weeks.

As Newsbusters’ Katie Yoder documents, pro-aborts far and wide are seething with rage over this. But curiously, that’s despite the fact that almost none of their token justifications are present. Delivery will no longer affect Marlise’s well-being, and as Cox points out, whatever end-of-life wishes she had told Erick almost certainly didn’t account for the remote possibility that ending her life would also end her son’s or daughter’s, in what is presumably a desired pregnancy.

That means a man is presuming to make a woman’s reproductive decision for her – with the full backing of the supposed “reproductive rights” champions. Apparently the outcome of a dead baby is all that matters.

At RH Reality Check, Katherine Taylor and Lynn Paltrow tie themselves into logic pretzels to argue that the case is “dehumanizing”:

Rather than archaic sexist laws left on the books from earlier times, the pregnancy exclusions are of a recent vintage. They establish that while men are free to determine what will happen to them if they become sick and unable to communicate their health-care wishes, women who may become pregnant are not free to plan the course of their health care, lives, and deaths.

*Sigh* for the millionth time, the sexes aren’t unequal; the situations are. Women are perfectly “free to determine what will happen to them if they become sick and unable to communicate their health-care wishes” in all cases except those where making that determination would kill someone else.

For that reason, pregnancy is fundamentally incomparable to a non-pregnant person’s wishes to have his or her own feeding tube removed. (And in reality, the principle behind pregnancy exclusion laws very well could apply to men – for instance, whether one conjoined twin exercising his rights would infringe on the rights of his brother.)

I’m sorry guys can’t get pregnant, but your quarrel is with biology, not some patriarchal boogeyman. The fact that liberals have devolved feminism into a perpetual temper tantrum about nature’s unequal distribution of reproductive processes isn’t a good enough reason to ignore the unborn life at stake.

It is hard to imagine a more absolute denial of a woman’s personhood than depriving her of the right to decide her own future, and then literally using her body without permission – possibly for weeks or months – as an object for a fetus to grow in.

Oops. So desperate are the authors to hijack pro-life language for themselves that they’ve unwittingly conceded the legitimacy of some of our own principles.

Whether you consider Marlise Munoz dead probably depends on whether you believe her soul passed on with brain death or she’s still in there until the rest dies, but the pro-aborts are clearly going by the former (or a secular equivalent), so let’s run with it. She’s dead; she has no more earthly consciousness, sentience, pain sensitivity, desires, welfare, or future. What she “would not have wanted” can only possibly matter if she has or had some intrinsic worth completely unrelated to those qualities – a sanctity of her life as a human being.

If that’s the case, then an unborn baby, from his or her earliest moments of existence, must also warrant intrinsic respect regardless of those qualities. A zygote can’t think, feel, or want, but he or she is a living human being with an entire future ahead. If anything, shouldn’t a full life waiting to be had outweigh a life that is fully over?

And clearly, these laws interfere with the practice of medicine, substituting legislators’ values for what should be decisions made by pregnant patients and their families in consultation with physicians.

So I take it that means we should repeal ObamaCare, then? (Sorry. I know that’s off-topic. But hey, low-hanging fruit.)

When you think about it, it’s only natural that pro-aborts accidentally make the pro-life case from time to time. There are no great morals to be protected or enlightenment to be learned by championing a cause of pure selfishness, so when looking for actual principles to wrap it in, there are only so many places to look.