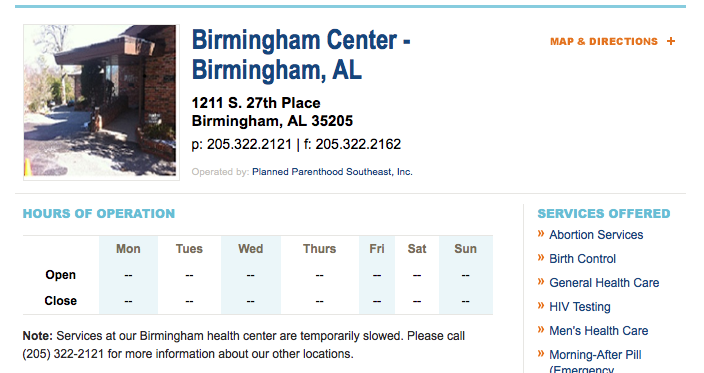 The last abortion facility in Birmingham, AL appears to be closed, at least temporarily, and local leaders are praying this will be the end of abortions in the city that has always been a center of the civil rights movement.

CEC For Life, a Birmingham-based pro-life ministry, reports that that a sign on the door of the Birmingham Planned Parenthood says “TEMPORARILY CLOSED.”

One story reports that sidewalk counselors started noticing that fewer patients were coming into the facility:

On December 30th, after the facility was closed for several days, pro-lifers on the sidewalk witnessed the facility’s director being escorted from the building, followed by a repairman changing all of the locks. Three days later, a sign from Planned Parenthood Southeast (PPS) appeared stating that the facility would be closed until January 6th, 2014. After the 6th, sidewalk counselors say the facility did reopen, but only briefly.

The Birmingham Planned Parenthood website also shows the temporary closure, and the operating hours have been removed entirely. 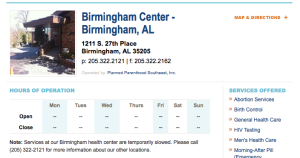 Local pro-life leader Natalie Brumfield has spent countless hours praying outside the Birmingham Planned Parenthood, many times using her lunch hour to pray by herself for the women and babies inside. Brumfield leads Bound4LIFE Birmingham and has participated for years with CEC for Life and the local 40 Days for Life ministry, as well. She rejoiced Wednesday at the news of the temporary closure:

The entire Birmingham pro-life community has been interceding, standing as witness, and counseling on the sidewalks in front of Planned Parenthood with this one dream in our mind: That this building would no longer house the innocent shedding of blood of our children, but that this building would be restored to a place of life and hope through the prayers of people standing in the gap before God and partnering with Christ for a culture of Life in our city.

We reported last year on the battle to shut down Birmingham’s other abortion clinic, the infamous New Woman, All Women, which had continued to operate without a license. However, the Birmingham Planned Parenthood continued with abortions – Until now.

No announcements have been made on a permanent closure, but leaders are hopeful that this is the beginning of the end of abortion in the city. Fr. Terry Gensemer, the director and founder of CEC for Life, said, “For the sake of everyone this facility continues to harm, we are praying it remains closed.”

Brumfield says the dream is worth it for them all:

We will never give up on this dream. Birmingham is just the beginning for what God is doing. Beyond our prayers to see places like this shut down in Birmingham and across the nation, our prayer is that these closures would be replaced with a revelation of Christ and His fullness of Life.