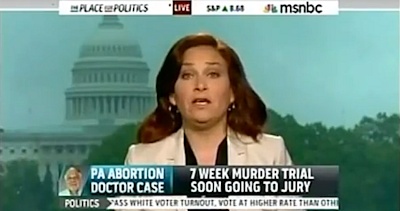 Ilyse Hogue, president of NARAL Pro-Choice America, is lately a favorite guest on MSNBC. Over the weekend, MSNBC interviewed Ilyse Hogue about current events surrounding the Kermit Gosnell murder trial. In the interview (below), Ms. Hogue — seemingly unaware of the fact that NARAL’s own search engines could disprove her within seconds — made the bogus claim that her organization was “the first out of the gate to call attention to [Gosnell].”

The American people join me and my organization in being outraged that this man was able to operate for years, preying on poor women who desperately needed safe and clean medical services but were unable to get it because of the restrictions that drove credible and reputable providers and doctors out of business in Pennsylvania and we were the first out of the gate to call attention to this case. [Emphasis mine.]

So Ilyse Hogue claims that NARAL Pro-Choice America was the first organization to blow the whistle on the horrors of Gosnell, when in fact their earliest statement on the trial — which has been in the works since January — was two weeks ago. NARAL released a statement on the Gosnell trial on April 16, and has subsequently commented several times. But the earliest documentation of NARAL commenting on Gosnell was two weeks ago… which makes them months — or even years — behind those who actually spoke up first:

Pro-Lifers are, in reality, the group of people that has been vocal about the horrors of Gosnell from the beginning. In fact, it was not until the April 12 media blast on Twitter (unsurprisingly, shortly before NARAL finally decided to comment) that Ilyse Hogue’s organization piped up, releasing a statement that included the following:

“Kermit Gosnell’s actions were reprehensible, illegal and reminiscent of back-alley abortions from the days before Roe v. Wade. The conditions in Gosnell’s clinic were horrific, demonstrating what can happen to women when abortion isn’t available through safe and legal providers.”

We have to wonder why, if NARAL is truly so concerned about the conditions that women were forced to face at the hands of Gosnell, they did not speak up sooner. We have to wonder why, when they supposedly represent the needs of women, they waited until after the major media outlets had finally picked up the story to even release a statement. If the media hadn’t caught on and begun to seek statements from organizations like Ilyse Hogue’s, would NARAL have ever commented? Given the evidence, it seems unlikely.

The onus is on us as humans who care about women getting the medical services they need to drive all doctors out of business who don’t hold their patients’ best interests at heart.