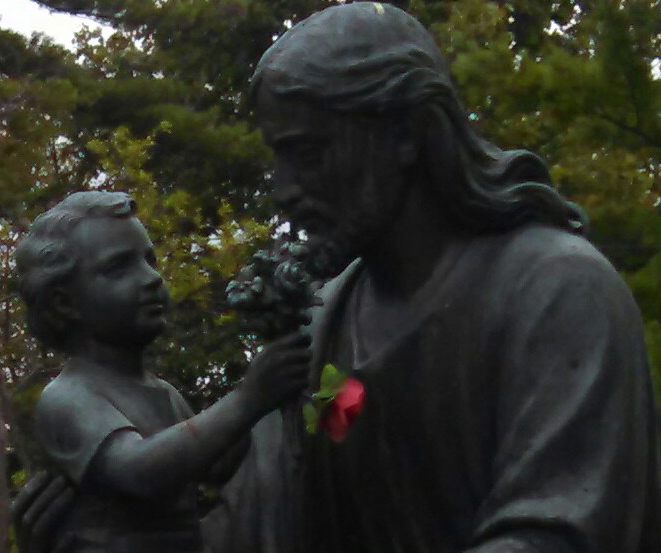 On September 13, a cool and cloudy morning in Metro Detroit, approximately 80 people gathered to honor the victims of abortion on the National Day of Remembrance for Aborted Children at Holy Sepulchre Cemetery. The cemetery is the resting place of 23 unborn babies whose bodies had been retrieved from a dumpster outside the Lathrup Village abortion clinic, Woman Care, run by retired abortionist Alberto Hodari.

All spoke emotionally of the humanity and dignity of the unborn child, and prayed for changed hearts.  Dr. King claimed that “the tragedies in the world today happen because the world does not value human life.” Bishop Byrnes, standing at the gravesite of the 23 victims, gave the direction for the future. He focused his attention on a forgotten figure in the problem of abortion. He challenged  fathers.

Reading from the Gospel of Mark,  Bishop Byrnes based his comments on the message of Jesus blessing the little children: “Let the little children come to me; do not stop them; for it is to such as these that the kingdom of God belongs…And he took them up in his arms, laid his hands on them, and blessed them,”  the Bishop told the mixed crowd that children had little value in the day Jesus lived.  “A child was interchangeable with a slave,” he said. “But Jesus was indignant and rebuked his disciples communicating to us that pride and power are overturned in the Kingdom of God.”

“Children are dependent and so in need of our protection,” he said, “but today, children are treated like commodities!  Jesus was standing in the place of the patriarchs: the fathers who blessed the sons. But Jesus blessed all of the children and claimed them as his own so that they might have a heritage.”

The Bishop  concluded, “The whole pro-life movement is a challenge to fathers! The refusal of men to touch children is a call to deep conversion – to take the role seriously. Fatherhood is a holy act. Fathers must claim their children!”

Dr. Alveda King, niece of slain civil rights leader Dr. Martin Luther King Jr., confirmed the power of the father’s role by relating her own  story. In 1950, Alveda’s mother would have aborted her. Her mother had been hoping to attend college when she found out she was pregnant. But when she said she wanted an abortion, her father refused. “No! I have seen my child in a dream,” he said. “My little girl with red hair!” He also predicted she was going to grow up to become a teacher and speaker, which she did.

Dr. Miller, when asked about the role of fathers spoke from her experience: “The lack of responsibility on the part of men who father children and don’t want to care for them is one of the biggest reasons why women are compelled to go to abortion clinics. In the inner city it is a huge, huge problem. We can trace it back to Roe vs. Wade. That law was a ruling that fathers did not exist and a man has no say. Even married men become a complete non-entity when their wives want to have an abortion. The men can say nothing about their own children. Men should be rising up!”

The service at Holy Sepulchre concluded with prayers for our country: for true repentance, a return to the sanctity of life, protection for the weak, political candidates who respect life and the overturning of Roe vs. Wade.

On the National Day of Remembrance for Aborted Children, 120 services were held in Chicago, Los Angeles, Houston, Milwaukee and Detroit. Forty-two were held at actual gravesites while others were at memorial markers.

“These memorial services, right at the graves of the victims, are a powerful public witness to our nation that abortion truly kills innocent human beings,” says Dr. Miller.

If you would like to participate in the September 12, 2015 National Day of Remembrance, you can find more information at the abortion memorials website.