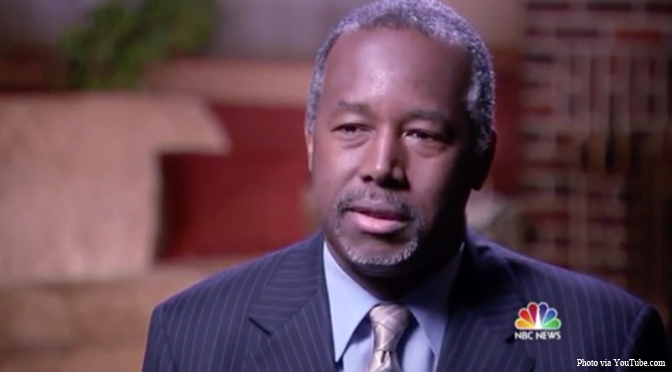 On Sunday’s “Meet the Press” episode, Republican presidential candidate Dr. Ben Carson told NBC’s Chuck Todd that abortion was an evil on par with slavery and expressed hope for Roe v. Wade to be overturned.

“I believe it does,” the retired neurosurgeon answered when asked if life begins at conception. He went on to call it a “perverted” line of thinking to tell mothers that “that baby is their enemy.”

“During slavery — and I know that’s one of those words you’re not supposed to say, but I’m saying it,” Carson continued, “a lot of the slave owners thought that they had the right to do whatever they wanted to that slave. Anything that they chose to do. And, you know, what if the abolitionist had said, you know, ‘I don’t believe in slavery. I think it’s wrong. But you guys do whatever you want to do’?”

Carson then turned the burden of proof for justifying abortion on pro-choice advocates by noting, “if people can come up with a reasonable explanation of why they would like to kill a baby, I’ll listen.”

Carson’s direct answer “no” to the question whether women should have a right to abort clarifies past remarks in which a campaign spokesman indicated the candidate wanted merely to change laws on abortion instead of legislate.

Carson has been running on a passionate pro-life platform, and has argued against abortion on numerous occasions prior to his presidential campaign and political stardom, though he also favors so-called “emergency contraception” (which can function as an abortifacient).