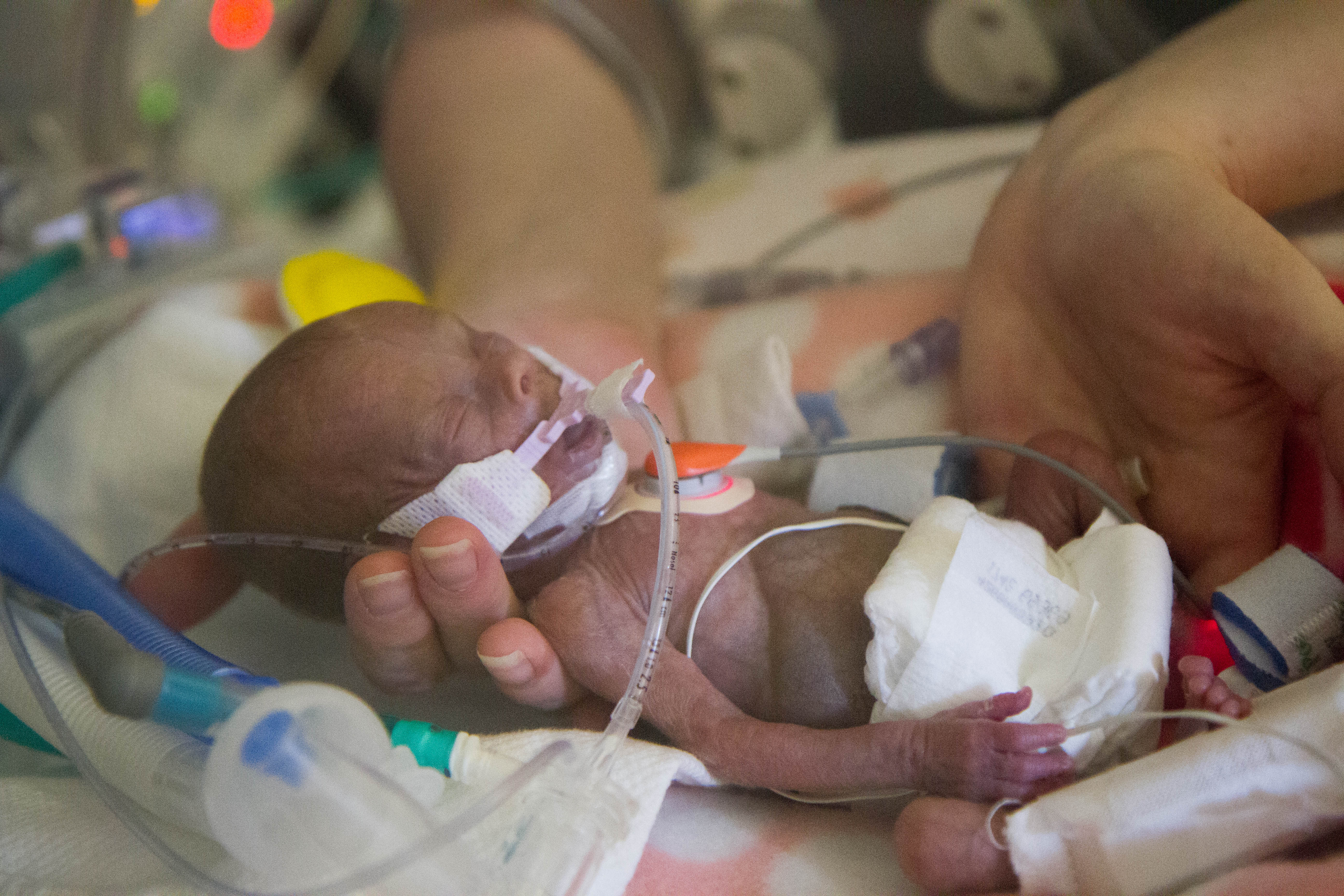 At 23 weeks gestation, Angela Bakker and her husband Michael were devastated to learn that their baby girl was not going to live. A routine ultrasound revealed that she was measuring much smaller than she should be, and she was diagnosed with intrauterine growth restriction. The placenta had not grown into the uterus properly and the little girl was not receiving adequate nutrition. The doctor told the heartbroken parents that their daughter would likely die in the womb.

Concerned for their daughter, the couple decided to get a second opinion, and they left their home in Reno, Nevada, to head to the University of California at San Francisco to meet with experts in their baby’s condition. Unfortunately, those doctors confirmed the diagnosis, and they told the Bakkers that there was the option to terminate. Angela Bakker and baby Naomi. The Kangaroo hold is a common way to help preemies and newborns thrive. (Photo by Emily Loftus)

The Bakkers refused abortion, saying that if their daughter was going to die, they were going to let her die on her time, safe in the womb. Then Mrs. Bakker was diagnosed with slight preeclampsia, which put her health at risk. Again, she was offered abortion, and was told that to not abort at this point meant that you had to “really, really want your kid.”

It was at that moment when the baby girl, usually very inactive, began kicking inside the womb.

“There were four hours left until the abortion cut off,” explained Mrs. Bakker, who was 23 weeks and 6 days pregnant. “But they told us that in cases like ours they make exceptions. They said, ‘The law doesn’t even apply to you. That’s how bad your case is.’ She started kicking, and I thought, that’s her little voice. That’s all she can say.”

Mrs. Bakker assured the doctor that despite the risk to her own health and the risk of her daughter dying before or at birth, or surviving and being blind and deaf, she really did love and want her daughter. And she had faith. “We’re not gonna get rid of her because she’s not healthy,” she said.

Because of the preeclampsia, doctors placed Mrs. Bakker on bed rest. But after just one week, the baby was not doing well and her heartbeat kept dropping. The doctor told them that the baby girl likely would die in the next 24 hours. In addition, the preeclampsia had become worse. Mrs. Bakker was sent to the hospital for an emergency C-section. No one believed Naomi would survive, but they agreed to try to help the baby with a breathing tube, despite the fact that it likely wouldn’t fit down her tiny throat.

On July 1st, baby Naomi Joy was born, and miraculously she was breathing on her own, something the doctor said he had never seen happen with a baby that tiny. And despite thinking the breathing tube would never fit down her small throat, it did, and Naomi was able to receive help for her little lungs to breathe. She was so tiny, her eyes were still fused shut, and though she was born at 25 weeks, she was only the size of a 19 week preborn child. She weighed just 364 grams. According to the doctors, babies need to weigh at least 450 grams to survive.

Though two miracles had already occurred, the Bakkers and the doctors were not optimistic about Naomi’s chances of survival. And if she did survive, there was still a great deal of concern for her health. She was at risk for brain bleeds, cerebral palsy, asthma, blindness, and deafness. But what they didn’t know was what a fighter she is.

In the first few weeks of her life she had a procedure done to her bowels to repair a hole, twice. Rarely does the point of incision heal on its own, but in Naomi’s case, it did. Naomi has also had hernia surgery on both sides, and deals with chronic lung disease. She was given medication to try to prevent brain bleeds and overall, she spent 142 days in the NICU before she was discharged and sent home with her family just one week before Thanksgiving.

Naomi is now five months old. She has not had a brain bleed, and her vision and hearing are both fine. They doctors say there is still a slight chance of cerebral palsy, but right now, her lungs are her biggest obstacle.

“We have to watch her closely,” explained Mrs. Bakker. “She had collapsed lungs in the NICU. They were hazy and didn’t look well. It sounded so scary. […] She’s on oxygen and monitors to watch her breathing and for apnea.”

Doctors believe the chronic lung disease will heal over the next year or two.

Growth is also a concern for Naomi and a dietician visits her once a week to weigh and measure her. In addition to breast milk, Naomi drinks high calorie infant formula to help her gain weight.

“Developmentally, we just see how we go with milestones,” said Mrs. Bakker. “I’ve connected with micro preemie groups and some of the children are totally fine, some have big issues. Lungs are a common problem. I haven’t met anyone who is as small as she is. She’s definitely one of the smallest weight wise.”

Now home with her parents and big brother Nathaniel, Naomi still visits the doctors and is carefully checked over. And as cold and flu season picks up the pace, the family is being extremely careful to keep germs away from Naomi. Naomi at home with big brother Nathaniel (Photo via Facebook)

“It’s been quite a journey and so far it’s had a good ending,” said Mrs. Bakker. “These babies don’t get a chance because parents do end up terminating a lot of the time. It’s not been easy. It’s been difficult and heart-wrenching, and every day you wonder if your baby is going to live. […] Doctors can be wrong. Always get a third or fourth opinion and know that even then they can be wrong. We trusted the best doctors in the country, but we also prayed a lot. I didn’t believe she would make it. That was just protecting ourselves. It was a shock that this happened, but our faith and trusting that no matter what, it’s taken care of, is a big part of it.”