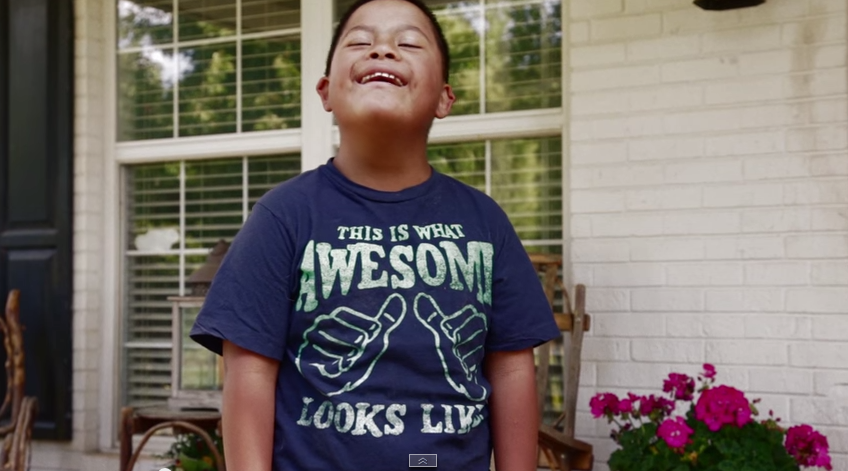 “Mama, where is you?” calls Eddie. He’s looking for his mother who is being interviewed for a documentary about how Eddie came to be in her life. It’s a beautiful story, but one that begins with tragedy.

Eddie was born in Ecuador, but he was abandoned, and discarded with the trash. A carpenter, who had walked out of his shop, noticed that a garbage bag next to the dumpster was moving. Inside was a baby boy with Down syndrome. A policeman, also named Eddie, brought the baby to a local orphanage for children with special needs. Eddie was named after him.

A few months later, Rachel and Jim Van Eerden, and the two eldest of their 10 children, traveled to Ecuador on a mission trip. On their last night, they took a tour of the orphanage.

“While we were on the tour, my eyes met this little baby,” said Rachel Van Eerden in the documentary. “It was just love at first sight.”

The family decided to adopt him. As they told the News and Record, the adoption took years and was full of challenges, but the family was sure of their decision.

“Our faith played a huge role,” Rachel Van Eerden told the News and Record. “That kept us strong through the whole process.”

Many well-meaning friends wondered what the family was thinking— parents to 10 children, spending years trying to adopt a child with special needs from a foreign country.

“This is what people, their perception probably is: that we, we have a lot of children. And our hands are full,” said Rachel Van Eerden. “Why would we want to take in a child with special needs? Of course, there are sacrifices. But what Eddie pours into us far outweighs any sacrifice.”

Jim Van Eerden recalls one such moment when Eddie showed his true gift of love, and why he earned the title “ambassador of love” from his family:

“We were at church and in a crowd of people he made a beeline to somebody just so that he could hug this person. And at the end of that hug, the person started weeping. And something none of us had discerned. This person’s heart was broken and Eddie had discerned that.”

“He points us to Christ,” says Rachel Van Eerden through tears. “I want to be a worthy mom of Edison Mateo Van Eerden’s life.”