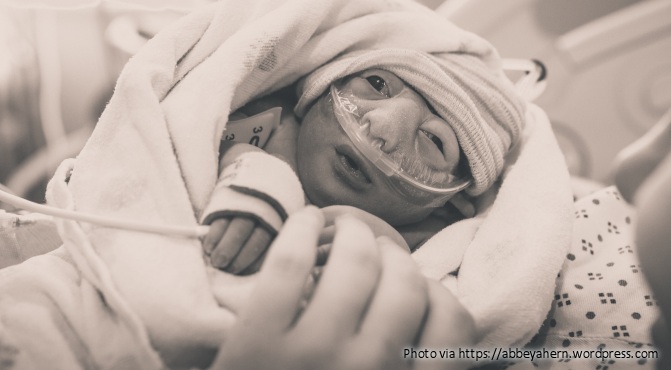 Annie Ahern lived for only 14 hours and 58 minutes after birth, but two years later, acts of kindness in her honor are still spreading across her home state of Oklahoma.

At 19 weeks gestation, Abbey Ahern and her husband, Robert, were told that their baby girl had anencephaly, a condition in which the skull and therefore the brain do not fully develop. Babies with anencephaly rarely survive more than a few hours. The couple decided not to give up on their daughter.

Annie was born on June 26, 2013, and the time she spent with her family was precious. A photographer was on hand to photograph the family, including Anne with her big sisters.

“I will always look back on that time and that day with such joy because it was one of the most beautiful days of my life,” Ahern told Fox 25. “And that’s amazing that you can say that about the day you lose a child.”

When Ahern saw a Facebook status asking individuals to give acts of kindness as birthday gifts, the idea inspired her to do the same in honor of Annie.

Ahern created the hashtag #pistolannieahern, and created business cards to hand out. She asked individuals to give the acts of kindness in Annie’s honor, and to share those stores via social media. The response was tremendous —Ahern went through the first 500 cards in one day. Now, local businesses are also carrying the cards, including Salon Envy, The OKC t-shirt shop, and Cuppies & Joe.

In addition to inspiring countless strangers, Annie was the very first infant in Oklahoma to donate her organs. Thanks to this act of generosity, new protocols were established, and now other parents are able to do the same, allowing allow their children to live on through organ donation.

“She was so much bigger than 14 hours and 58 minutes,” Ahern said. “She was far bigger than that.”