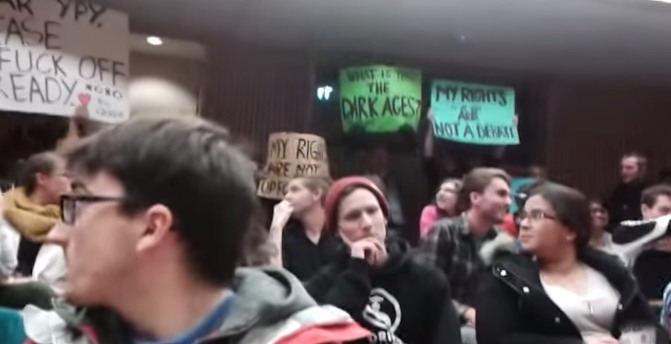 The University of Victoria (“Uvic”) is among Canada’s top ranked academic institutions. It’s also known as a “progressive” environment where, according to one graduate, students learn “‘how to think’ rather than ‘what to think.’” Not everyone on campus agrees with this approach, however. That was evident last November when Uvic’s pro-life group, Youth Protecting Youth, organized a debate between philosophy professor Eike-Henner Kluge and pro-life activist Stephanie Grey. While the event attracted students wishing to hear both sides of the issue, others felt that those wishes didn’t need to be respected.

Abortion supporters were angered that university officials would even allow a debate to happen. The pro-abortion Uvic Men’s Circle responded to the news by posing a thoughtful question on Facebook, asking, “What the fuck, right?” Such eloquence was followed by a call for disruption. On the day of the event, protesters tried to derail it with loud chants of “no debate” and “free speech” (how the first demand fits with the second wasn’t explained).

As Live Action’s Lauren Enriquez reported, this attempt at mob censorship didn’t go over well; one young woman pointed out that the hecklers were interfering with her right to “think freely.” That didn’t stop them from bragging about what they had done, of course.

On the Men’s Circle’s Facebook page, someone named Piotr Burek announced that he was “happy to join in” with the ruckus, explaining that Stephanie Grey shouldn’t be given “space on Uvic’s campus.” This is the same page where pro-life arguments are condemned as “misogynistic,” “violent,” and (most damningly) “uncool.” The consensus seemed to be that an abortion debate would expose women to dangerous ideas that they need to be protected from. Whether a particular woman actually wants such protection doesn’t seem to matter: Mr. Burek and friends apparently know what’s best for her.

If the denizens of the Men’s Circle really want to combat misogyny, violence, and general uncoolness, then they should take a look at the abortion business. Aside from the obvious violence of pulling someone apart, the industry facilitates coercion and abuse on a regular basis. That includes helping sexual predators to destroy the evidence of rape, assisting pimps with enslaving their victims, and making sure that abusive partners can abort their way out of responsibility and child support payments.

Piotr Burek’s fellow Canadians should take action by contacting their member of parliament and demanding legislation against coerced abortions. Americans can support similar laws in the US as well. Further, they can ask Congress to investigate and defund Planned Parenthood, an abortion giant with a long history of misconduct.

I have no doubt that Uvic’s abortion proponents will continue to make noise about misogyny and violence. Meanwhile, pro-lifers will continue to actually address those problems. Rather than trying to control how people think, we’ll keep focusing on ways that we can help.