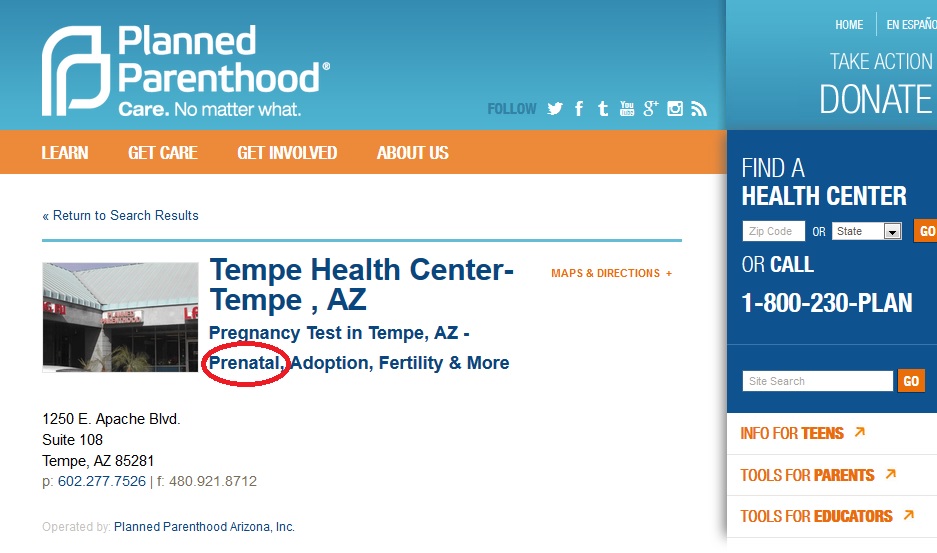 In the 12News report by Brahm Resnik, Arizona CEO Bryan Howard (referred to only as “Howard” by the news station) said Live Action’s video was “fake news” because the organization does not provide prenatal care, and never claimed they did (emphasis added): “They are taking us to task for something we never said we did, and trying to manufacture a controversy out of it,” added Howard. And, “In my 20 years in Arizona, we have referred (patients) for prenatal care but have never provided it directly.”

Sound familiar? National CEO Cecile Richard gave that same answer when caught in a lie about Planned Parenthood’s mammogram claims. “We do not have mammogram machines at our health centers and we’ve never stated that we did,” Richards remarked. Hmm, perhaps all the commentary about mammograms was merely meant to mislead the public about the ‘healthcare’ they claim to provide:

The typical response from Planned Parenthood to the media is to…

A) Deny the evidence exposed by Live Action, regardless of what it is.

B) Accuse Live Action of being an ‘extremist’ anti-abortion group, while painting their organization — which is the largest provider of abortions in the nation — as mainstream.

C) Claim, without any proof, that the videos are “deceptively edited.”

These three strategic responses are all Planned Parenthood has to say as far as the mainstream media outlets are concerned. 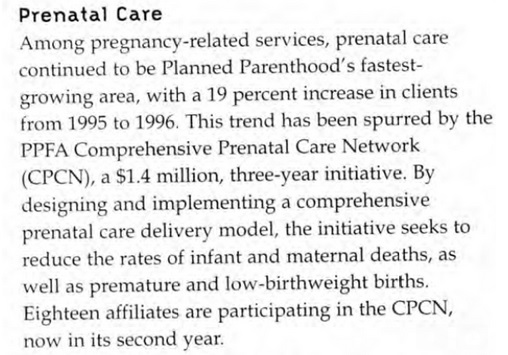 So rather than admit the obvious — that Planned Parenthood deceives the American public about the services they provide — a Planned Parenthood CEO in Arizona claimed they never claimed to provide prenatal care in the state, despite the fact that their own websites claim it is.  (And, instead of fact-checking, a local media outlet published it as truth.)

One would think this “claim” by PP’s CEO would be easy to verify, right? That is, if you are prone to verify a story, which it seems this reporter is not. For instance, Resnik could have looked at some of the services Planned Parenthood of Arizona bragged about on its Facebook page: 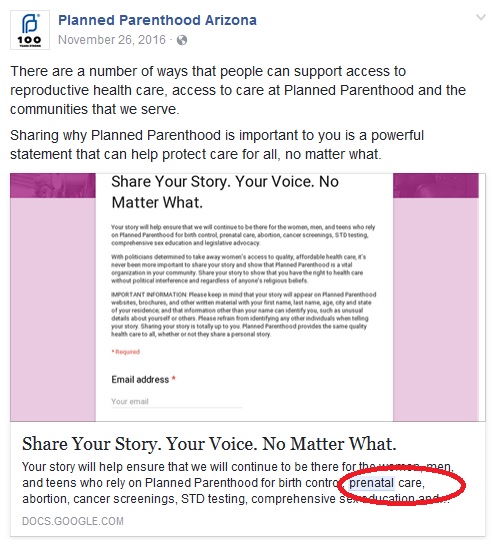 Resnick could have also done a simple search online, at Planned Parenthood’s website, and then could have questioned CEO Howard why Live Action’s callers were told the prenatal service was not offered, while it is clearly advertised online: 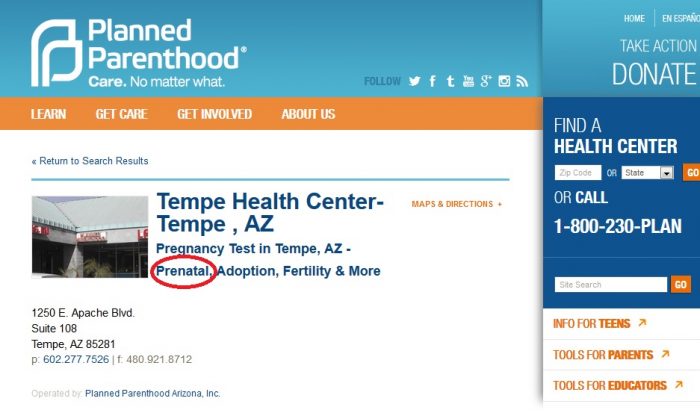 Here’s another fact of which Howard and Resnik may be unaware: Tempe isn’t the only Arizona Planned Parenthood falsely advertising prenatal care. 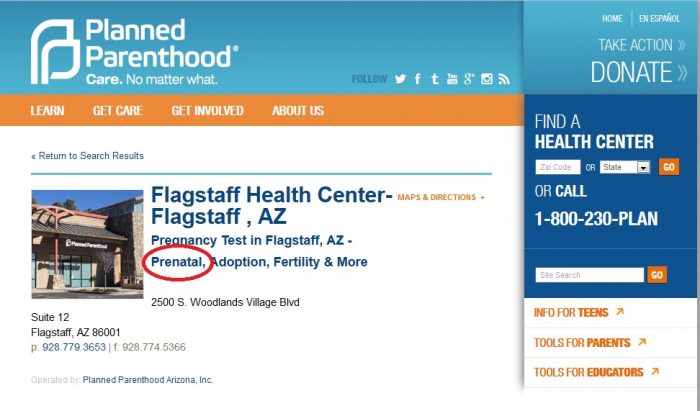 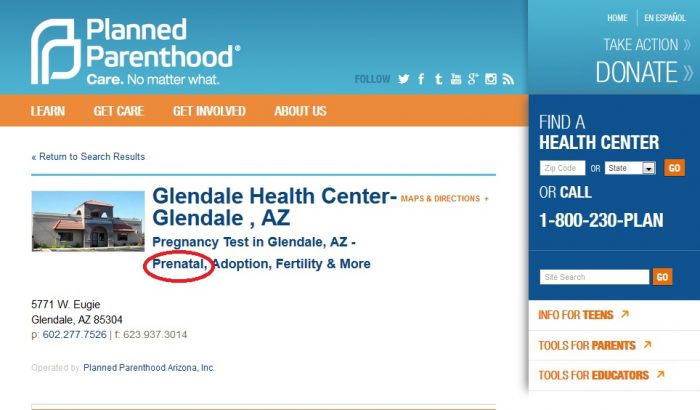 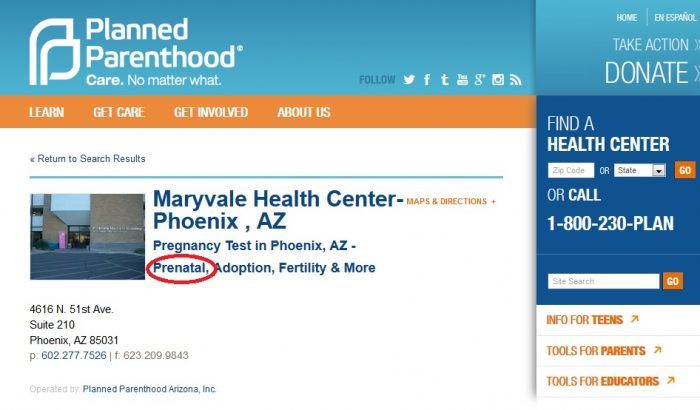 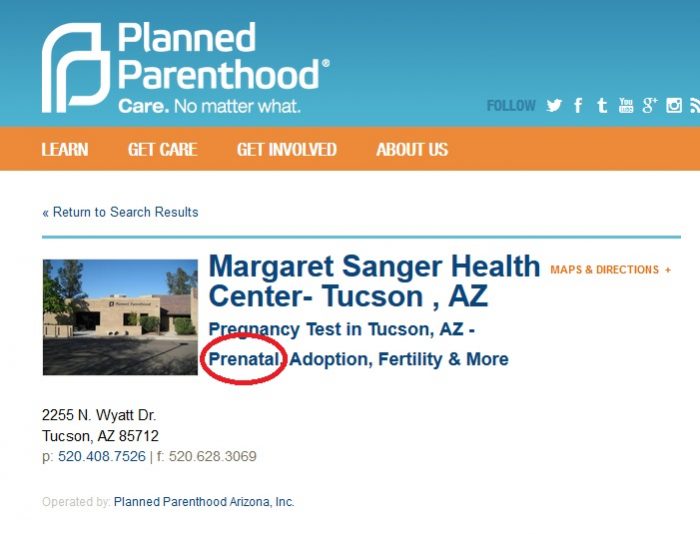 The media has failed to call out or question abortion corporation Planned Parenthood, which masquerades as a “health center” so they can receive half a billion in federal tax dollars a year.
Journalists are supposed to report facts. The media should not be a format for Planned Parenthood to spew propaganda without being challenged. It is clear that a simple look at Planned Parenthood of Arizona’s own website would have disproved CEO Bryan Howard’s claim.
But, sadly, basic fact checking doesn’t appear to be standard journalistic practice for some reporters anymore.