They’ve got a bridge in Brooklyn to sell you, too.

Editor’s Note: This article originally appeared in Public Discourse: Ethics, Law, and the Common Good, the online journal of the Witherspoon Institute of Princeton, NJ, on January 23, 2013. It is reprinted with permission.

In the 1960s and 1970s, abortion advocates used a variety of arguments to advance their cause. Some emphasized women’s liberty and autonomy. Others tried to persuade people that easy access to abortion would benefit society as a whole. Consider just two representative quotations:

A policy that makes contraception and abortion freely available will greatly reduce the number of unwanted children, and thereby curb the tragic rise of child abuse in our country. (NARAL, 1978)

The impact of the abortion revolution may be too vast to assess immediately. It should usher in an era when every child will be wanted, loved, and properly cared for. (NARAL co-founder Larry Lader, 1974)

In the early 2000s, academics Steven Levitt (University of Chicago) and John Donohue (Yale University) published a study in the Quarterly Journal of Economics, titled “The Impact of Legalized Abortion on Crime,” claiming that legal abortion unexpectedly lowered crime rates in many American cities during the 1990s. Groups supporting abortion rights generally distanced themselves from this argument, fearing its eugenic implications. Though the findings have received some widespread credibility because of Levitt’s popular book Freakonomics, they have been much criticized by other academics.

In this essay I show that easy access to abortion during the past forty years has not benefited society as a whole. Legal abortion has not reduced out-of-wedlock births, child abuse, or crime rates.

After the Roe v. Wade decision, the out-of-wedlock birthrate continued to rise, even though the number of abortions increased substantially. At first glance, this seems somewhat surprising. When abortion became legal, a sexually active woman who did not want to bear children had the option of terminating her pregnancy.

But legal abortion dramatically changed social and sexual mores. When abortion became easily available as a back-up option, women as well as men became less careful about using contraceptives and more likely to engage in pre- and extra-marital sex. This increase in sex outside marriage further weakened social taboos regarding sex before marriage—resulting in even more sexual activity. Men who impregnated women faced considerably less social pressure to marry.

Indeed, Donohue has observed that after Roe v. Wade, conceptions increased by 30 percent. Of course, a higher percentage of these conceptions were aborted. However, the increase in the incidence of abortion failed to offset this increase in conceptions. As such, the out-of-wedlock birthrate continued to climb. 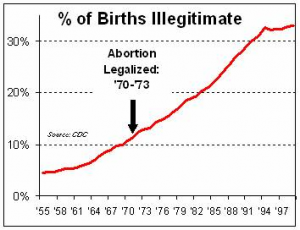 Abortion advocates frequently argued that legal abortion would decrease child abuse. Children who were wanted, they claimed, would be less likely to suffer from abuse than those who were unwanted. But social science data suggest that this logic is flawed. A landmark study of 674 abused children by Edward Lenoski (University of Southern California) found that 91 percent of the parents admitted that they wanted the child they had abused.  A 2005 study by Priscilla Coleman (Bowling Green University) showed that women who obtained abortions were 144 percent more likely to abuse their own children.

At a more theoretical level, Dr. Philip G. Ney, head of the Department of Psychiatry at Royal Jubilee Hospital in Canada, has outlined why abortion can lead directly to child abuse.

1. Abortion decreases an individual’s instinctual restraint against the occasional rage felt toward those dependent on his or her care.

2. Permissive abortion diminishes the taboo against aggressing [against] the defenseless.

3. Abortion increases the hostility between the generations.

4. Abortion has devalued children, thus diminishing the value of caring for children.

5. Abortion increases guilt and self-hatred, which the parent takes out on the child.

6. Abortion increases hostile frustration, intensifying the battle of the sexes, for which children are scapegoated.

Overall, American statistics paint a clear picture. Legal abortion did not reduce child abuse. In fact, the exact opposite happened. The National Center on Child Abuse and Neglect has reported that child abuse has increased more than 1,000 percent since the legalization of abortion in 1973. According to data from the US Statistical Abstract, deaths due to child abuse continued to rise after the Roe v. Wade decision and increased by 400 percent between 1972 and 1990. Obviously, child abuse is caused by a variety of complicated factors. Still, our experience in the United States provides no evidence that legal abortion reduces child abuse.

Donohue and Levitt’s study cited above presented their results from a regression analysis that attributed an unexpected reduction in the US crime rate during the 1990s to legalized abortion. In essence, they argued that low-income earners and racial minorities tend to abort more often. Since criminals disproportionately appear in these categories, many would-be criminals were never born due to legal access to abortion. Crimes that these would-be criminals would have committed never happened. The study received considerable coverage from a number of mainstream media outlets including the New York Times and the Washington Post.

As a social scientist, I was skeptical of Levitt and Donohue’s findings. They claimed that the crime rate fell earlier in the group of states that legalized abortion before the Roe v. Wade decision in 1973. But they did not seem to consider that many people who obtained abortions in states that legalized early, like New York, actually resided in other states, as reported in a National Bureau of Economic Research paper by Theodore Joyce, Ruoding Tan, and Yuxiu Zhang in 2012. They also claimed that states with high abortion rates in the 1970s and 1980s tended to experience larger drops in their crime rates. But again, they did not seem to control for interstate migration. After all, many people born in one state grow up elsewhere.

Steven Sailer has presented a devastating critique of Levitt and Donohue’s research. He argues that the end of the crack-cocaine wars, not legal abortion, was largely responsible for the crime rate decline in many cities. More importantly, he shows that we can easily test Levitt and Donohue’s hypothesis by breaking down crime rates demographically. If their theory is correct, there should be a sharp decrease in the crimes committed by young people.

But Sailer shows that the cohort of 14-to-17-year-olds born after the Roe v. Wade decision was much more likely to commit homicides than the cohort of 14-to-17-year-olds born before Roe v. Wade. Similarly, the percentage and the number of violent crimes committed by those between the ages of 12 and 17 spiked in 1993 and 1994, over twenty years after abortion was legalized. Economists John Lott and John Whitely have made similar arguments in an article published in the academic journal Economic Inquiry, titled “Abortion and Crime: Unwanted Children and Out of Wedlock Births.” 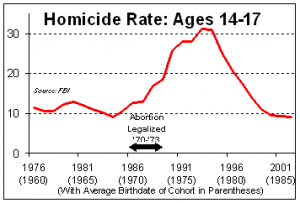 Empirical evidence clearly shows that forty years of legal abortion have not helped our society. Contrary to the bold claims of abortion advocates, there is no proof that legal abortion has reduced either the out-of-wedlock birthrate or the incidence of child abuse. In fact, both the out-of-wedlock birthrate and the rate of child abuse have increased since the onset of widespread legal abortion. And research claiming to show that legal abortion has reduced the crime rate has been proven flawed. Since their empirical arguments for abortion’s benefits are weak, abortion advocates today generally focus on arguments for the autonomy and liberty of women. However, as we observe the fortieth anniversary of Roe v. Wade and consider the impact of forty years of legal abortion, it is certainly worth noting that abortion advocates’ many promises for society remain unfulfilled.