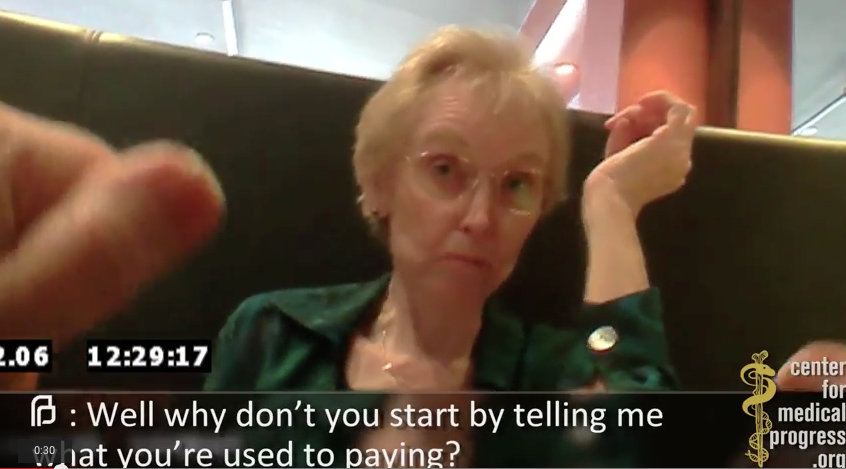 Three undercover videos have now been released by the Center for Medical Progress. While the third is far more graphic than the first two, each video tends to add to the horror of the viewer.

Reflecting back upon the second video in which Planned Parenthood Medical Director Dr. Mary Gatter and Senior Director of Medical Services Laurel Felczer converse with actors posing as fetal tissue buyers, there are at least seven highly disturbing statements I read in the transcript.…

1) Gatter:  The busier you are, the less likely the staff is going to take the time to say “by the way, there’s two more forms for you to sign.” Which is such a waste (inaudible) If we need liver today, and there’s a seventeen week patient who would be perfect, but she wasn’t approached, then you can’t do that.

The picture I get after reading this is of a waiting room full of women who are viewed by medical assistants as if they are body part stores. “Oh, great, there’s our seventeen weeker, she’d be perfect for liver.” Why would they even have a “need” for a specific body part, if this is simply about donating whatever tissue you have to bio tech companies?

2) Buyer: What would you expect for intact tissue? What sort of compensation?

Gatter: Well why don’t you start by telling me what you’re used to paying.

Buyer: Okay. I don’t think so. I’d like to hear, I would like to know, what would make you happy. What would work for you?

Gatter: Well, you know in negotiations the person who throws out the figure first is at a loss, right? So [laughs]

If the only cost for the tissue donation was reimbursement fees, than why is this even up for negotiation? Shouldn’t there be established fees? Later on in the transcript, Gatter says Planned Parenthood has been doing tissue donation for decades. In all of that time, there hasn’t been a document created or a policy made to determine basic reimbursement costs? How convenient for Planned Parenthood.

Gatter: For the schedule, say how many second tri’s are- and you know second tri’s could not show up, there’s a lot of slip between plans and the actuality. The staff- your staff would call the night before and say “I need a twelve weeker, do you have any?” That kind of thing. Then they could come in or not come in. It would be irregular for you in terms of whether she could do it or not.

Gatter seems to have more concern over the fact that a bio tech rep would be put out of her way for coming if the ‘twelve weeker’ didn’t show, than the fact that a woman is going through a life-altering procedure.

4) Gatter: So that’s an interesting concept. Let me explain to you a little bit of a problem, which may not be a big problem, if our usual technique is suction, at 10 to 12 weeks, and we switch to using an IPAS or something with less suction, and increase the odds that it will come out as an intact specimen, then we’re kind of violating the protocol that says to the patient,“We’re not doing anything different in our care of you.” Now to me, that’s kind of a specious little argument and I wouldn’t object to asking Ian, who’s our surgeon who does the cases, to use an IPAS at that gestational age in order to increase the odds that he’s going to get an intact specimen, but I do need to throw it out there as a concern. Because the patient is signing something and we’re signing something saying that we’re not changing anything with the way we’re managing you, just because we agree to give tissue. You’ve heard that before.

Buyer: Yes. It’s touchy. How do you feel about that?

One minute she’s concerned and the next she’ll talk to Ian and won’t make a fuss about it.  Is the health of the patients and the quality of the procedure the most important? Or is she willing to make changes to ensure a better product for her bio tech customers?

5) Gatter: Here is my suggestion. Write me a three or four paragraph proposal, which I will then take to Laurel and the organization to see if we want to proceed with this. And then, if we want to pursue this, mutually, I talk to Ian and see how he feels about using a “less crunchy” technique to get more whole specimens.

Enough said. We are talking about human beings here, not cereal.

Laurel: I think so—

Dr. Gatter: Well let me agree to find out what other affiliates in California are getting, and if they’re getting substantially more, then we can discuss it then.

Dr. Gatter: I mean, the money is not the important thing, but it has to be big enough that it is worthwhile.

Again, in light of Gatter’s claims that the fee is just for reimbursements, her need to make sure it’s big enough to be ‘worthwhile’ is troubling.

7) Dr. Gatter: It’s been years since I talked about compensation, so let me just figure out what others are getting; if this is in the ballpark, it’s fine, if it’s still low then we can bump it up. I want a Lamborghini. [laughs]

If it was a joke, it’s a telling one. Abortion procedures are not laughing matters. Gatter’s attitude shows a mindset that devalues the patients she serves and makes light of the difficult, life-altering procedures they choose.