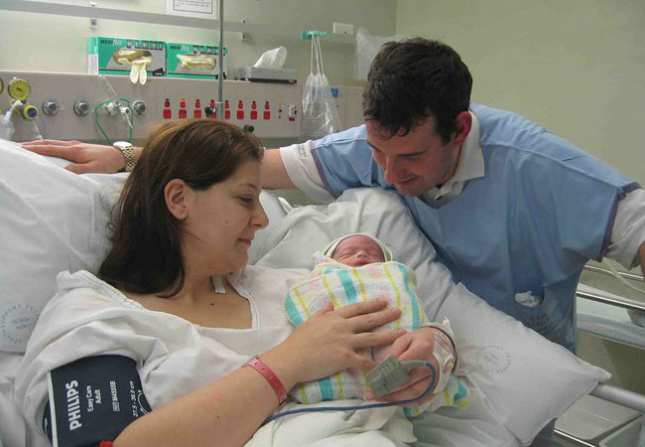 “Your husband isn’t with you?” The doctor looked concerned.  Hannah Boland had decided to go alone for her follow-up appointment.

Only a short while before, a pregnancy had ended in a miscarriage. But this pregnancy was different. They were out of the danger zone. The baby was already 20 weeks gestation. Alison and Harry, Hannah’s two toddlers, aged three and two, respectively, were going to have another sibling.

“I like having the husband or partner present in these sorts of situations. We detected a problem with your baby’s scan,” the doctor continued. “There seems to be a problem with his brain.”

An information sheet was pushed in front of Hannah.

The baby’s brain had not developed, the doctor explained. The condition could not be altered. It was unlikely he would be born alive. If he survived birth, he would have a few, short, painful moments to live.

“I was in total shock,” Hannah told LifeSiteNews, “This sort of thing happens to other people.”

Hannah and her husband, Michael, raise their family in a semi-rural area outside Sydney, Australia. Michael is the sole breadwinner, working as a mechanic who specializes in elevators.  Hannah is a stay-at-home mom, who was taking care of their two toddlers at the time of the diagnosis.

This diagnosis put her faith to the test.

The couple’s main struggle was how to cope with the uncertainties that lay ahead.

Abortion was never an option for the Bolands.  “With our first child, we went through those questions because they can do prenatal testing.”  Those tests were “a waste of time,” she said. “We knew that that was not something God would want us to do…Who are we to say that that person is not worthy to live?”

Almost every doctor they met recommended an abortion. Hannah says one doctor said at a consultation, “Tell me why I am here?  I don’t even know why I am here. There is no hope for your baby.  No.  None.  There is a 99.9 percent chance of your baby dying right after he is born.  It is likely that he will just gurgle a little and then die.  I won’t even be present at his birth; there is no point.”

The doctors also thought there was no point in giving the baby oxygen in the event that he lived after birth.  One doctor suggested simply letting the baby starve.

Prayers and tears were all the couple was left with.  They loved their son and wanted what was best for him.  They had to decide on their own what that would mean.

In the end they decided to feed, love and serve him.  The one real struggle was resuscitation.  Was it in his best interest to bring him back? Their final decision: “We would not do anything intentionally to end Stephen’s life.”

The birth took three days.  When Stephen was born, “he stunned the theater staff with his loud, healthy cry.  It was a far cry from the gurgling, dying cry they had expected to see,” Hannah recounted in a book she later published about her son.

Their son looked healthy and beautiful.  Tears rolled down Michael’s cheek and family members trickled in and out to meet and cuddle the new baby.  Stephen’s brother and sister were excited to meet him, but too young to fully process what was going on.  They only understood that he was very sick.

Hours later, Stephen began to fuss, a signal that it was feeding time.  The nurses inserted a feeding tube through Stephen’s nose.  It seemed to nourish and settle him.

“He was feeding.  He was well.  I was going to be able to bring him home and take care of him!” Hannah wrote.

However, the initial signs were misleading.  Stephen began spitting up his food and it became apparent that he was not assimilating any nutrition.  It was only a matter of time.

Hannah recounts being tired and frazzled, not knowing how to handle a child that was slipping away.  Her husband showed her how.  He gently took his son and said, “Well, mate, you’re still here for a reason.  And as long as you are still here, I am going to serve you as best I can.” He cradled him and swabbed his dry lips.

It was a time to be completely selfless, which Hannah admits was difficult especially after the long labor.  She is ashamed to recount, “Here was my son dying, suffering, and once again all I could think about was how it was hard on me.”

During short intervals Stephen stopped breathing, but would revive again and again.  After several hours of cradling Stephen, Michael turned to his wife. Their son was gone.  He slipped away in the arms of his father, close to his mother.  He had arrived at his final destination.  In some ways, their journey had only just begun.

This month marks the one-year anniversary of Stephen’s birth.  Hannah has written an account of his life, “47 Hours with a Prince.”

“I want to help people in the way I have been helped,” she says, explaining that a Christian counselor helped her though the many months of grieving that followed the death of Stephen.  She hopes to help those with emotional illness, noting, “the emotional side of us is just as prone to illness as any part of us.”

Editor’s Note: This story originally appeared on LifeSite News on July 18, 2012, and is reprinted here with permission.