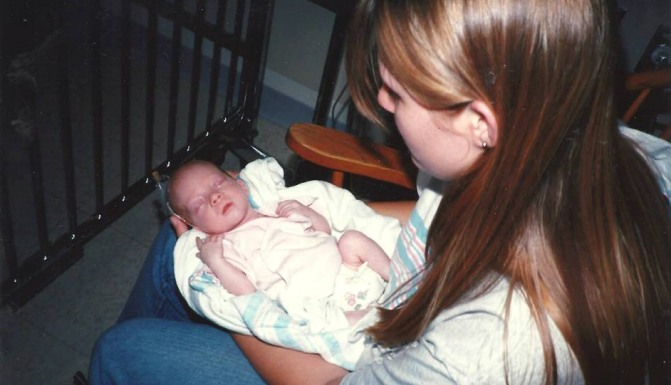 According to the timetable that I set for myself as a teenager 18 ½ years ago, I should now be able to have my life back.

I had gotten pregnant at the age of 17, and married my baby’s father so that the child could be raised in a two-parent home.

I won’t lie and say that it was easy.

I was the daughter of a Protestant preacher, and my boyfriend at the time was the son of a church deacon.  We were both in college full-time, me as a freshman on a pre-med track, and him as a junior and a student athlete on a full scholarship.  A baby was most certainly not in the plans for either of us, but since we had already planned on getting married, albeit at a much later date, we decided to hurry things up a bit so that we could at least spend some time as a married couple before our child arrived.

There are so many things that the older me, looking back, cannot believe that we handled.  The shock of finding out that our lives were forever changed.  The heartbreaking task of telling our parents that we had erred.  The shame of everyone knowing the outcome of a very personal action.

And that was just the beginning.

I knew that something was wrong with the pregnancy on my wedding day, when I started to bleed.  This fear became personified a little under two months later, when we found out that the reason that I had been so sick and continued to bleed was because our baby had a severe birth defect.

The diagnosis was gastroschisis, a condition where the abdominal cavity does not fully close during development, leaving a large portion of the intestine protruding outside of the fetus’ abdomen.  Associative complications included likely preterm birth, possible severe cognitive limitations, definite post-birth surgery, guaranteed developmental delays, and a very real possibility of death. We were told that we would be selfish and cruel if we did not choose to terminate, as our child would have a painful, limited existence.

What are two kids to do when faced with news like that?

What can any parent do when told that their child would very possibly die once it was born, and if it did not, the life that it would lead would be so full of challenges that it would be a kinder thing to choose to terminate.

It would be like the baby just went to sleep, I was told.

I could be able to live my life again, and not have to worry that having a child would mean that my education and career would take a backseat to raising another human.

I could choose to be free.

I am sure that the medical professionals meant well, knowing at least some of the things that I would have to give up and the challenges that I would face were I to continue with the pregnancy.  They most likely thought that I would be relieved to have a “good” reason for which to rid myself of what they considered to be an unwanted burden.  In their eyes, breaking the crippling chain which would prevent me from reaching the educational and professional successes that were just within my grasp.

However, my husband and I had both been raised to know the value of life.  Even though we had made a mistake in choosing to act outside of God’s perfect plan for us, we knew that our child was innocent.  Our baby had been entrusted to us to care for and protect.

So, two scared kids chose life for their baby.

Then came the whirlwind of medical appointments, changed plans, additional preparations, and altered expectations.  Surgeons were consulted.  The Neonatal Intensive Care Unit (NICU) was visited.  Plans were cancelled so that we could remain near the hospital.  People were told, so that they could be aware and pray.

I think that this last factor was the hardest for me.  I was trying so hard not only to do the right thing, but to prove to everyone that I could be a good mom, even though I was very young.

I couldn’t even be a good mom when pregnant.

I couldn’t protect my baby from harm.

The worst of it was when one well-meaning Christian leader kindly told me that the reason that my baby had a defect was because God was punishing me for my sin.

How is a scared teenage mom supposed to respond to that?

Even though I knew that it wasn’t true, that one declaration deeply wounded me.  To this day, I can still remember feeling like someone had just carved out a huge hole in my midsection.  I don’t even remember what I said, but I most definitely remember how those cutting words made me feel.

Despite all of the hardships, I continued to pray, believing that God would work a miracle despite my shortcomings, healing my innocent child.

My pleading prayers with God to heal my child went unanswered, and my daughter was born prematurely at 32 weeks gestation, via caesarean section.

When the doctor lifted her strongly flailing body from me, and I heard her angry cries, I knew that I had a fighter on my hands.

When the nurses brought my baby over to me, her intestines which covered her from shoulders to knees covered with protective plastic wrap, so that I could kiss her before they took her away for surgery, I fell head over heels in love.

I have to admit that I was not expecting that.

I can’t speak for other parents, but I had no idea of the gut-wrenching depths of love that I felt for this tiny, helpless baby.  This wrecker of my plans.  This obstacle to my hopes and dreams.

In one moment, she became my hopes and dreams.

As I went through the post-surgery processes, all that I could think about was her.

How was she doing?

Was she going to be ok?

Would the surgery be successful?

All of the other factors which I had previously thought so important suddenly became meaningless.  All that mattered was the well-being of my child.

Several hours later, my husband and I received a phone call from our daughter’s surgeon, telling us that a miracle had occurred.  He had gotten all of her intestines back inside her tiny body in one surgery.  She was stable, and we could see her the next day.

Even though I was heavily drugged, I bawled.

The next 6 weeks were full of daily visits to the NICU to see our daughter.  We couldn’t hold her or touch her at first because she was recovering from the surgery, but we could at least talk to her, sing to her, and let her know that we were there. Apparently our regular presence in the NICU was somewhat of an aberration, because the nursing staff commented that the kid parents showed up more frequently to see their child than most of the other parents of the sweet babies in the NICU.  We did kangaroo care, I pumped milk for my child, my huge football lineman husband regularly rocked his daughter and sang “You are My Sunshine,” and we learned how to handle the challenges that would come with caring for a premature baby who had also had abdominal surgery when we had her at home.

6 weeks after her birth, our daughter came home.

Looking back, I laugh at my younger self for thinking that it would get easier now that my baby was home with me.  It only got harder, and has continued to get harder as she has grown.

I struggled with still being a child while trying to raise another child.  In her younger years especially, my daughter sadly received a meager portion of patience and grace from me, as I focused so much on trying to instruct her so that she wouldn’t be lacking in any way due to having such a young mom, that the sweet moments of just being together quickly slipped through my fingers.

That is what I regret most, I think.

During those seemingly endless days of sleeplessness, temper tantrums, and redundant activities, I was focused so much on surviving and caring for my daughter’s physical and mental needs that I lost out on the joy which accompanies fully living in the moment.  Those years were so challenging that I honestly thought that when each new season in my daughter’s life arrived it would get easier.  Not only did that not happen, but when my daughter stepped into each new season, I felt an unexpected deep yearning for the one which had just ended.

Older parents warned me that I would wake up one day and look at my daughter and realize that in a blink of an eye, she had grown up.  I thought that they were wrong.

Today, I know that they were right.

My baby is grown, and I am not ready for it. My daughter is a fighter.  She is the most strong-willed individual that I have ever encountered.  She is stubborn, has a temper which reflects her red hair, has little tolerance for being corrected, kicks against boundaries at every possible opportunity, and delights in pushing my buttons.

She also has the biggest heart that I have ever encountered, quietly cares for the weak and hurting, will tenaciously pursue justice, has a deeply ingrained sense of honor and integrity, and sweetly shows me that she loves me by picking me wildflower bouquets, drawing me incredible charcoal sketches, and seeking out ways that she can help lessen my burden at home.

She is my Magnum Opus. 18 ½ years ago, when I found out that I was pregnant with her, I yearned for the day that she would turn 18 and I would be free to be just myself again.

18 ½ years later, I wish that I could turn back the clock and raise her all over again.

It has not been easy at all, and I honestly am surprised, even with God’s grace, that my husband and I were able to do as well as we have.  But, looking at my beautiful daughter, I am so very glad that we chose life, and fully embraced the challenge and joy that raising our daughter has been.

To my daughter:  You are the greatest gift that I could have ever asked for.  I love you more than life itself, and am proud and honored to be your mama.  Happy 18th birthday, my baby.  I’m so glad that I’ll never have my life back.  I couldn’t imagine a life without you.